KoGuan Leo started loading up on Tesla shares when the COVID-19 pandemic first sent the stock into a tailspin. Back then, the shares were selling for a split-adjusted price of about $40. Before he was done, he owned 22.7 million shares worth about $3.57 billion*. Today, he is the third largest individual Tesla shareholder, only trailing Tesla Technoking Elon Musk and Tesla Chairman Larry Ellison.

Shares of Tesla are down 55% year to date and the stock has erased about $225 billion in market value since Musk closed his deal to buy Twitter in late October, according to Markets Insider. That has KoGuan Leo disgusted with Elon Musk. Last week he tweeted, “Elon abandoned Tesla and Tesla has no working CEO. Tesla needs and deserves to have working full time CEO.” He is calling for a new CEO to take over the EV maker, which would allow Musk to focus on all his other ventures — Twitter, SpaceX, The Boring Company, Neuralink, and perhaps others we are forgetting at the moment.

Despite his frustration, Leo is not selling his Tesla shares. Instead, he is planning to buy more, as he believes the stock is undervalued now and there’s still room for the company to grow with a laser-focused CEO.

“Frankly my dear, I don’t give a damn if Elon stays or leaves Tesla. Tesla is a great company and $160/shr is cheap,” Leo said, adding that he’d like to see an operational executive similar to Tim Cook take over the company. “Elon is a mere hired hands. He is our employee… Elon was the proud father, Tesla has grown up… An executioner, Tim Cook-like is needed, not Elon,” Leo tweeted. “I plan to invest more $billion bc Tesla will be the biggest company with or without Elon.” 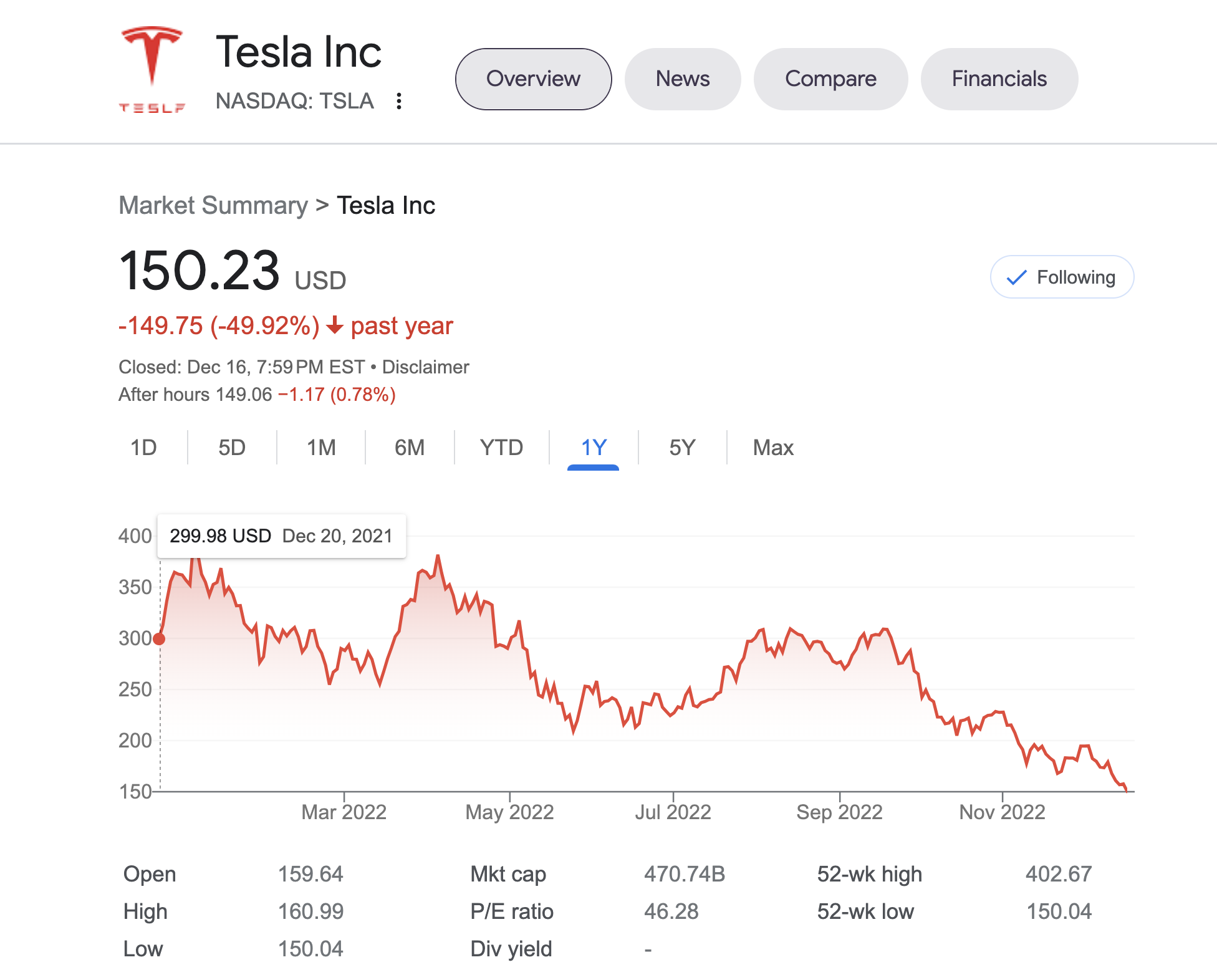 The recent collapse in the price of Tesla shares came at a time when the S&P 500 climbed more than 3%, so investor concerns are real, Wedbush analyst Dan Ives says. He calls Musk’s Twitter adventure a “circus” and “the twilight zone.”

In an apparent reference to an options trade, Leo said that he will buy an additional 3 million shares at $160 per share if Tesla falls below $160 in a few weeks, but what bothers Leo is that while he’s buying Tesla stock, Musk is selling. “Today, I just put in another $500 million on the line to support Tesla stock price @$160 whereas Elon sold $35B his shares and maybe more last few days,” Leo tweeted.

A few hours after this tweet, it was revealed that Musk sold an additional 22 million shares for $3.6 billion earlier this week. Musk’s sales in one week are roughly equal to the amount of Tesla stock that Leo owns.

We are loathe to bash Musk, although his conduct seems to invite plenty of negative reaction. Elon has his foibles, but it has to be said the Tesla board of directors is composed of weak-kneed sycophants who refuse to do their jobs. These feckless stooges do everything they can to enable Musk’s most outrageous behavior while doing nothing to rein in his most egregious excesses.

Tesla is not a privately owned corporation. It is a publicly traded company, which means the CEO and the board owe a fiduciary obligation to the shareholders. Most people don’t know what that means, so here’s a primer on what is expected of any fiduciary according to Wikipedia:

“A fiduciary is a person who holds a legal or ethical relationship of trust with one or more other parties (person or group of persons). Typically, a fiduciary prudently takes care of money or other assets for another person. In a fiduciary relationship, one person, in a position of vulnerability, justifiably vests confidence, good faith, reliance, and trust in another whose aid, advice, or protection is sought in some matter. In such a relation, good conscience requires the fiduciary to act at all times for the sole benefit and interest of the one who trusts.

“A fiduciary duty is the highest standard of care in equity or law. A fiduciary is expected to be extremely loyal to the person to whom he owes the duty (the ‘principal’) such that there must be no conflict of duty between fiduciary and principal, and the fiduciary must not profit from their position as a fiduciary.”

Is that clear enough? These fat cats sit in their titanium-paneled boardroom and draw their generous salaries and perquisites. In exchange, they are under a legal duty to act in the best interests of the shareholders, not some absentee CEO who hasn’t time to mind the store. According to BoardSource:

“Fiduciary duty requires board members to stay objective, unselfish, responsible, honest, trustworthy, and efficient. Board members, as stewards of public trust, must always act for the good of the organization, rather than for the benefit of themselves. They need to exercise reasonable care in all decision making, without placing the organization under unnecessary risk.

“Not every board member can be a financial wizard. Every board member, however, needs to be a financial inquisitor. It is essential to understand basic terminology, be able to read financial statements and judge their soundness, and have the capacity to recognize warning signs that might indicate a change in the overall health of the organization (emphasis added). If a board member does not understand something, they must be willing to find out the answer.”

Some of you might be under the mistaken impression that the Securities and Exchange Commission (SEC) will act to protect Tesla shareholders from Musk’s shenanigans and the board’s refusal to act responsibly. If that’s your plan, good luck. So far, the SEC has chosen to shrug and look the other way. The upshot is we have a corporation with no one in charge, a board of directors that can’t be bothered to step up and do their job, and a government watchdog standing around with its hands in its pockets saying, “Nothing to see here. Move along.”

Given the circumstances, what can a private individual do? KoGuan Leo may have the best idea. Buy the dip, then sit back and wait to become a Tesla millionaire (or billionaire as his case may be, but he’s already a billionaire). For most of us, that would take a very long-term approach to investing — and that assumes it’s the right approach in the first place (we don’t offer investment advice, so certainly don’t take this as such). Lots of people don’t have the stomach to double down after getting smacked with staggering loses, but if you believe in Tesla, it’s a possible strategy.

*Please note: I also own shares of Tesla (NASDAQ:TSLA). Though, not to nearly the same degree. No one at CleanTechnica knows anything about the stock market, as our dismal investment history makes perfectly plain. We do not give investment advice and recommend you consult a qualified financial advisor before making any investment decisions. We should probably follow our own advice.

Complete our 2022 CleanTechnica reader survey for a chance to win an electric bike.

Don’t want to miss a cleantech story? Sign up for daily news updates from CleanTechnica on email. Or follow us on Google News!