The first FAR title, FAR: Lone Sails, was a clever, gorgeous puzzle game about guiding a vehicle across an apocalyptic landscape. So, there was cause to rejoice when developer Okomotive announced it’d be helming a sequel, returning to the exciting world it had crafted. And the reward for that is a fresh new experience that takes things in some exciting new directions.

While the first title largely saw you navigate the dried-out ruins of a once-great civilization, the end of that release concluded with you reaching a distant shore and at long last finding water. FAR: Changing Tides on the other hand is an inversion of this, taking place almost entirely in and around water. This alters the way puzzles and environments are presented, but mechanically the game is largely unchanged from the first. You control your vehicle, an Okomotive – so named after the developer – and have to juggle a number of systems to keep it moving forward: make sure the furnace has enough fuel, don’t let the engine overheat, and so on. While your Okomotive was more of a car in the first title, you’ll find yourself with a boat for the new experience. 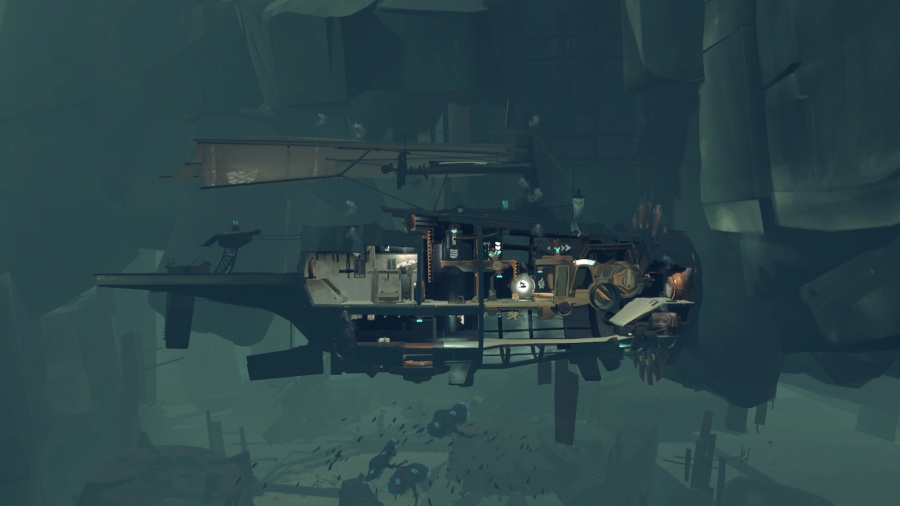 Much like with the first title, the system management of your vessel is one of the most entertaining and demanding facets of the game. These sequences require constant attention as you frantically rush back and forth between the compartments of your craft, ensuring everything is running smoothly. While you’ll start with sails, and an engine, as you trek across the world, you’ll add new modules, building that juggling act out, adding things like a boost, a winch, and a ballast tank. That’s right a ballast tank. This time the Okomotive also happens to be a submarine.

This added dimension is far and away the most impactful new addition. While up on the surface you don’t always need fuel because you can just deploy your sail when the wind is in your favour, you don’t have that luxury down beneath the brine. Which is why it’s rather unfortunate that fuel is as plentiful as it is. There are so many stashes and deposits of material to burn that we never even really fell below half-reserves. It ends up feeling like a lost opportunity, as having to burn smartly rather than indiscriminately would be an exciting element to incorporate with all the other systems you need to concern yourself with.

Luckily, the other elements of the underwater design are pretty great. Navigating the ship through dark, dank industrial piping or getting your ship around an ice floe makes for interesting environmental puzzles that the slow, lilting vehicle can’t achieve on the surface. The surface-level puzzles are all great, too, heightened by impressive design cues, letting you know where to go without disrupting the beauty of the world much. 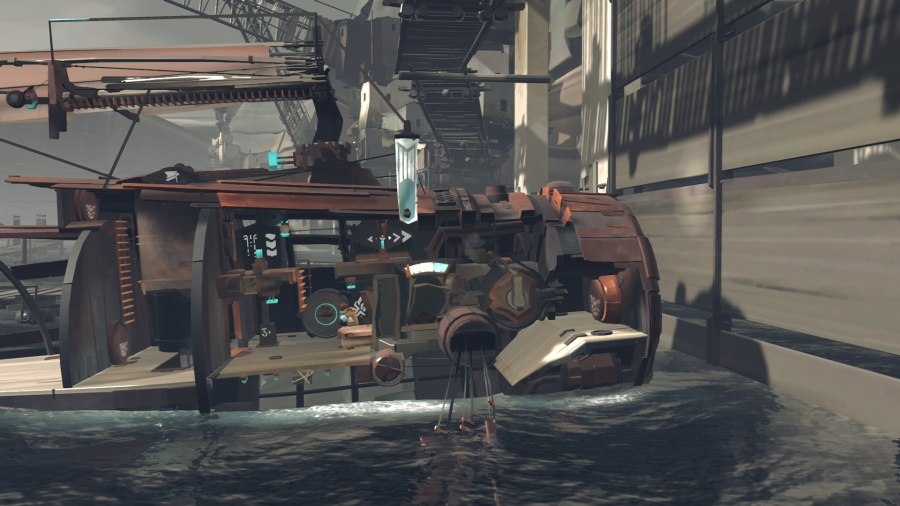 Much like with Far Sails, the puzzles never get too challenging, providing a nice gentle learning curve. They also offer an opportunity to explore locales outside of your ship, though there isn’t quite enough of it, especially considering how interesting some of the locations are. Our personal favorite is a massive crane that you have to use to move a submerged train car from your path, but there are other interesting locales, like a refinery, and a power plant.

These detours are welcome, but they don’t take up too much of the game’s five to six hour runtime. As fun as managing your ship maybe be, the balance of time spent on other activities is askew. Sure, sometimes you have obstacles to navigate while sailing, but a lot of it is just driving the ship in an uninterrupted straight line. These quiet moments allow you to bask in the beauty of the environments, but the lulls can get distracting in how long they last, making you worry you might have missed something.

Okomotive showed with its first title that it has a talented team of artists, and this holds true again. Environments are cavernous, making you feel like an insignificant speck amongst an unthinking, unfeeling world. There’s a certain beauty to the hollowed remains of the civilization that you find yourself in. The game toils away with lots of browns, greys, and blues giving the title a paradoxical muted vibrancy. The environments have a canvas-painted quality to them, which adds a lot of depth to the shading. This understated use of colour allows the moments where you’re in wildly different environments to pop even more, like a late-game area covered in snow, or an encounter with a sea of bioluminescent jellyfish. 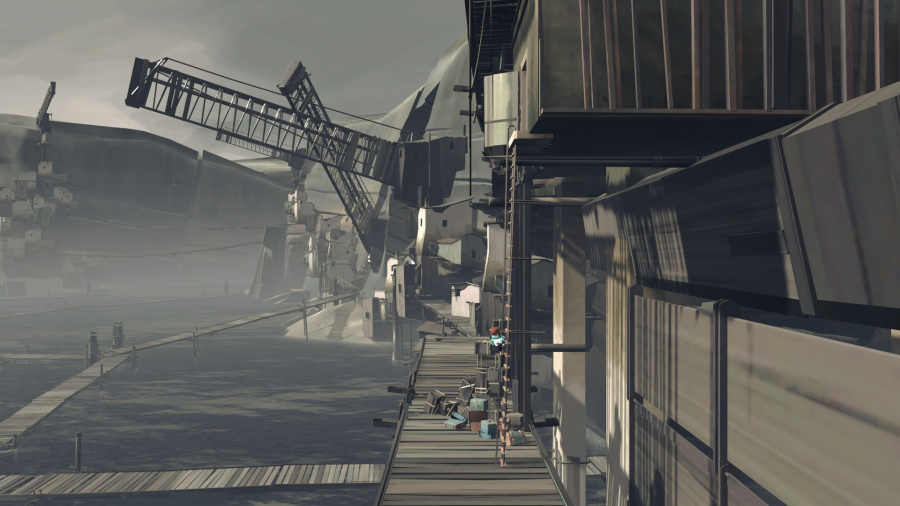 All of the encounters with wildlife are memorable in fact. The duality of a dying world juxtaposed with these aching moments of beauty really help to make the journey that much more satisfying. Given how hollowed out and dead the world seems to be, these fleeting interactions lend a sense of hope to the game; hope for a better future. This feeling persists and carries all the way through to the phenomenal closing moments.

Sound design displays an impressive level of artistry, too, particularly with water: churning waves roar deafeningly, torrential rain presents an unnerving wall of sound — but the second you begin to dive, this harshness starts to strip away, replaced by an equally unnerving silence. The transition between the two is handled with great finesse and is an unexpected joy to encounter. Composer Joel Schoch, who scored the first title, returns offering another fantastic score, one filled with equal parts adventurous joy and sombre reflection on a world long gone.

FAR: Changing Tides is largely more of the same. With how good the first title is, that’s not a bad thing, but it leaves a little something to be desired. Great sound design and music, as well as incredible environmental art, don’t quite balance out the pacing issues, hard as they try. Your new vessel has more components to juggle than last time, and it’s mechanically satisfying, but you spend too much time doing it. While traveling underwater does add a new gameplay component to account for, the puzzles don’t offer enough of a challenge. All that said, Changing Tides is still worth your time.

The Many Advantages of Using Salesforce with Git

Beware Of The Fake Pump And Dump Scam