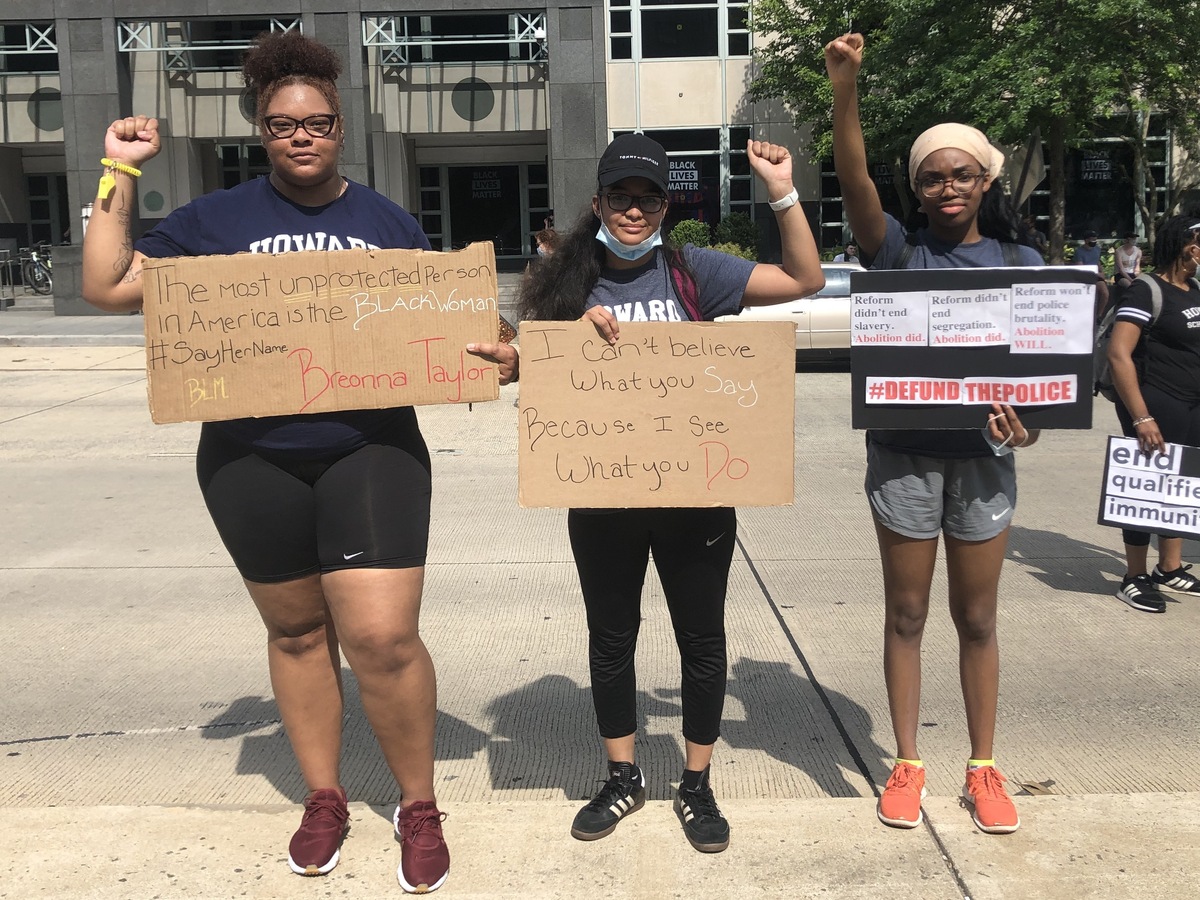 As demonstrators gathered around the White House last weekend, Howard University law student Tope Aladetimi leaned her cardboard protest sign against the street median and took a load off her feet. She had already been out protesting for a few hours, and the temperature was climbing into the nineties.

“There’s a power in using your body, and actually physically being here,” Aladetimi said. “Oftentimes, our voices aren’t heard and this is the only way we’re able to get our message across.”

Domonique Dille, a Howard law school classmate, feels an urgency to this moment.

“We can’t wait until November to voice our opinions,” she said. “We’ve seen our parents, our ancestors fight. They’ve all fought, and we’re still fighting in 2020. And we’re going to keep this going until the election and even past then.”

With a presidential campaign and historic demonstrations unfolding at the same time, the country’s youngest voters and activists are being pushed to weigh their role in politics right now, trying to navigate the relative power of protest and electoral politics in real time.

The question is especially pressing for Gen Z, the generation of voters in their late teens and early twenties who grew up with endless school shootings, viral videos of police brutality and a political climate defined by President Trump — and who are rapidly aging into the voting population.

When former President Obama recently addressed protests swelling around the country, he urged young people not to forget about the election.

“I’ve been hearing a little bit of chatter on the internet about voting versus protest,” he said. “Politics and participation versus civil disobedience and direct action. This is not an either/or. This is a both/and.”

“I was feeling pretty pessimistic a week ago, and I’m more optimistic in this moment than I’ve ever been,” said Natalie Spievack, who’d been out protesting for several hours last Saturday.

“More optimistic about the possibility of making systemic change, but mostly optimistic because I’m experiencing for the first time in my life people coming together around a common cause and demanding change — and actually seeing people listen,” she added. 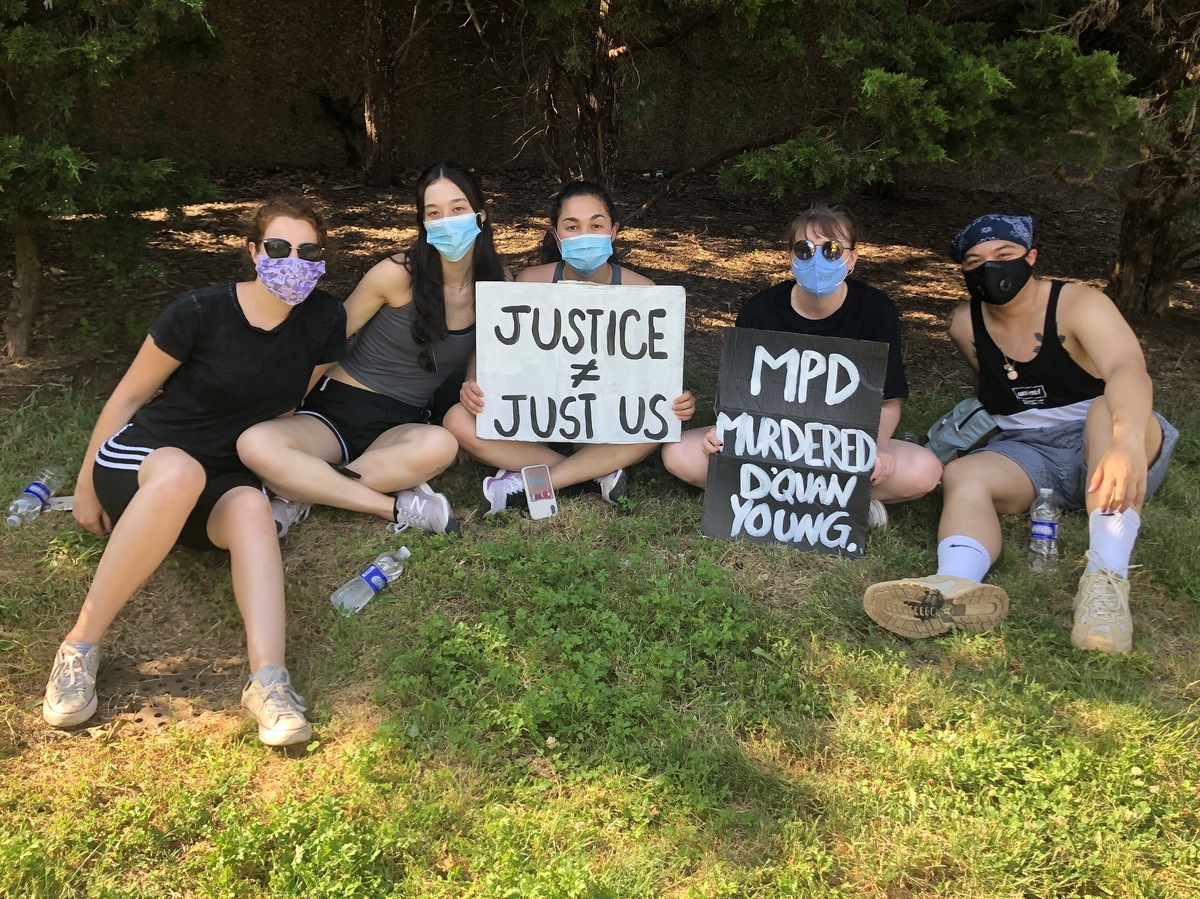 Spievack and several friends had found a shaded spot in a park to cool off.

They all said they feel like traditional modes of political advocacy have failed their generation. That’s in part why Raymond Sison says direct action and protest can be more powerful tools.

“There are so many issues to talk about, I mean, we’re here talking about police brutality, but like student loans — there hasn’t been anything done for students in America, one of the most indebted generations,” he said.

Everyone in the group said they recognize the importance of the 2020 election and are planning to vote this fall. It’s not really up for debate.

Like most of their generation, almost 80 percent, this group of young protesters overwhelmingly disapproves of President Trump. For comparison, 42% of Gen X voters and 48% of Baby Boomers approve of the president’s job performance.

Where it gets tricky, Spievack says, is trying to prioritize. Do you spend your summer planning demonstrations or knocking doors for a political candidate, like the presumptive Democratic nominee Joe Biden?

To actually drive systemic change, Spievack says you have to hold politicians accountable — not just vote your preferred party into office.

“I feel like that’s been my biggest internal struggle over the last week and a half, figuring out what’s my place in creating change,” she says.

In Louisville, 19 year-old Sean Waddell organized a march for Breonna Taylor, the 26 year-old EMT killed by police this year.

“That could have easily been my brother, my sister or anybody,” he said, speaking on a call from a birthday celebration in Taylor’s memory, where thousands of people gathered downtown to release balloons and butterflies.

“Since middle school, seeing Trayvon Martin, Eric Garner, Terence Crutcher, Black people dying over and over again before my eyes, and being told to go to our politicians and seeing so little, it does take away our spirit,” he said.

But Waddell plans to keep organizing, and he’s optimistic this energy now will translate into a lasting movement for justice.

According to CIRCLE, a Tufts University research group focused on youth civic and political engagement, young people don’t seem to be disengaging. Instead, youth turnout doubled between the last two midterms. And the group found that in 2018, three times more young people attended a demonstration than in 2016.

“We have no more patience for justice to be served on a silver platter,” said Daud Mumin, an organizer in Utah with March For Our Lives. “We have to go and fight for it.”

After the 2018 school shooting in Parkland, Fla., in which 14 students and three educators were killed, the student-led March For Our Lives organized hundreds of demonstrations around the country calling for gun control, sparking a nationwide youth movement.

“The moment the march ended, we all took a deep breath, I think, collectively,” said Matthew Hogenmiller, the social media manager for March For Our Lives. “We were 16 years old. Daud was, too. We were young people trying to create a change and all of us were looking for next steps.”

Political advocacy and voter registration became a part of March For Our Lives’ equation, too, as the group went up against entrenched political organizations like the National Rifle Association.

But Mumin says getting involved in politics can be harder for young voters, especially people of color. And he’s watching how quickly the protests over police brutality sparked tangible change in cities around the country in a way that elections haven’t.

“Electoral work is not the most accessible work,” he said. “So when we tell African American people, ‘Are you concerned? Go and vote,’ it’s almost offensive. It’s almost a slap in the face.”

Matthew Nowling, communications director for the College Democrats, says protests over police brutality in Ferguson, Mo., actually inspired him to get involved in politics.

It’s a reminder, Nowling says, of what’s at stake not only right now, but on Election Day, too.

“The way to harness the momentum of the movement is really connecting the issues why people are protesting to direct Democratic Party policies,” he said.

Nowling says, while his organization is working to support the protest movement now, he’s hopeful the momentum will spill over into the election.