Crypto exchange KuCoin has unveiled dealings with another exchange, Poloniex, in an effort to move the crypto industry forward.

Together, Poloniex and KuCoin aim to help the crypto industry progress as a whole, instead of competing against each other within the sector, the statement detailed. Joint initiatives for the pair include forming a research entity, as well as other unspecified endeavors.

KuCoin’s decision to team up with Poloniex helps both entities, as each lends its strengths to the other, the statement said.

“Due to the complexity of today’s international political and economic situation, global institutional and even individual investors are seeking to balance the new systemic risk and long-term strategic returns of high-quality assets,” Johnny Lyu, CEO of KuCoin Global, acknowledged in the statement.

“Decentralized digital assets that are neither endorsed nor supported by sovereign credit are rapidly becoming one of the world’s most popular quality investing targets.”

The collaboration aids the two companies in taking advantage of opportunities held in the burgeoning crypto and blockchain industry, Lyu explained. “I believe, when we look back in five years, the strategic partnership between KuCoin and Poloniex would be viewed as a remarkable milestone of the digital assets industry,” he boldly added.

Shelley Wu, vice president of global business and marketing for Poloniex, described a competitive nature within the crypto industry. She proposed a different approach, using the Poloniex and KuCoin partnership as an example, which includes joint efforts in pursuit of common goals.

Back in March, KuCoin shifted its leadership, making Lyu CEO, while making then-CEO Michael Gan the chairman of the exchange’s overwatch entity, KuGroup.

Report: Most firms in Korea’s ‘blockchain city’ don’t know what blockchain is

Bitcoin (BTC) still beats gold as an investment in 2020 despite the precious metal generating its biggest returns in a decade.

In a knock to gold bugs, data shows that despite gold’s run this year, Bitcoin still trumps every macro asset when it comes to investment profits.

The S&P 500, an index with which Bitcoin has shown considerable correlation, is just 5.5% higher than at the start of January. Despite its increasing strength, the U.S. dollar has netted savers just 2.2% year-to-date returns, while oil is the big loser, with WTI crude down by almost 35%.

For popular statistician Willy Woo, zooming out to examine Bitcoin’s returns versus gold since the cryptocurrency’s inception in 2009 compounds the case for holding BTC.

Gold’s having its best year since 2010. This how it’s doing against BTC.

The numbers would appear to speak for themselves. $1 of Bitcoin purchased even one year ago would have netted its owner $0.31 profit, while gold would have got $0.27.

As Cointelegraph reported, Woo has stated that he believes Bitcoin will soon decouple from gold and other traditional markets to carve out a price trajectory of its own.

The cryptocurrency has weathered criticism from gold bugs as much as ever during 2020’s market volatility, with serial gold bug Peter Schiff among its most vocal naysayers. Schiff has toned down his skepticism in recent weeks, focusing on the U.S. dollar and the state of the country’s economic debt.

U.S. total debt has now passed $27 trillion for the first time in history, according to the U.S. National Debt Clock.

“The National Debt just past $27 trillion, up about $7 trillion since Trump took office. If [Donald Trump] serves just one term he will likely add more to the national debt in 4 years than Obama did in 8,” Schiff wrote on Oct. 6.

“What’s worse is that [Joe Biden’s] 1st term may add more than both combined.”

The two entities developed the PoC in collaboration with 12 other banks on top of the blockchain platform of Singapore-headquartered company dltledgers.

dltledgers told Cointelegraph that the banks involved in the project now intend to launch the platform for commercial use by central banks around the globe.

While the platform will first be used by the Monetary Authority of Singapore, the entities involved in the project also plan to propose it to central banks from the United States, United Kingdon, Thailand, United Arab Emirates, India, Hongkong, Qatar and Indonesia.

Backed by Enterprise Singapore — a government enterprise under the Ministry of Trade and Industry — and the Association of Banks in Singapore, the trade finance platform is expected to help banks fight fraud in lending and commodity trade.

DBS and Standard Chartered said in a statement that the pilot test helped reduce the chances of duplicate financing from different bank lenders for the same trade inventory. This, they added, will lead to greater trust and confidence among banks and traders.

This is only the latest effort by DBS in using blockchain to digitize trade finance. Only four months ago, the bank joined the blockchain network Contour, built over R3’s Corda, in order to modernize processes for the settlement of letters of credit.

Port of Rotterdam testing blockchain and AI for renewables trading 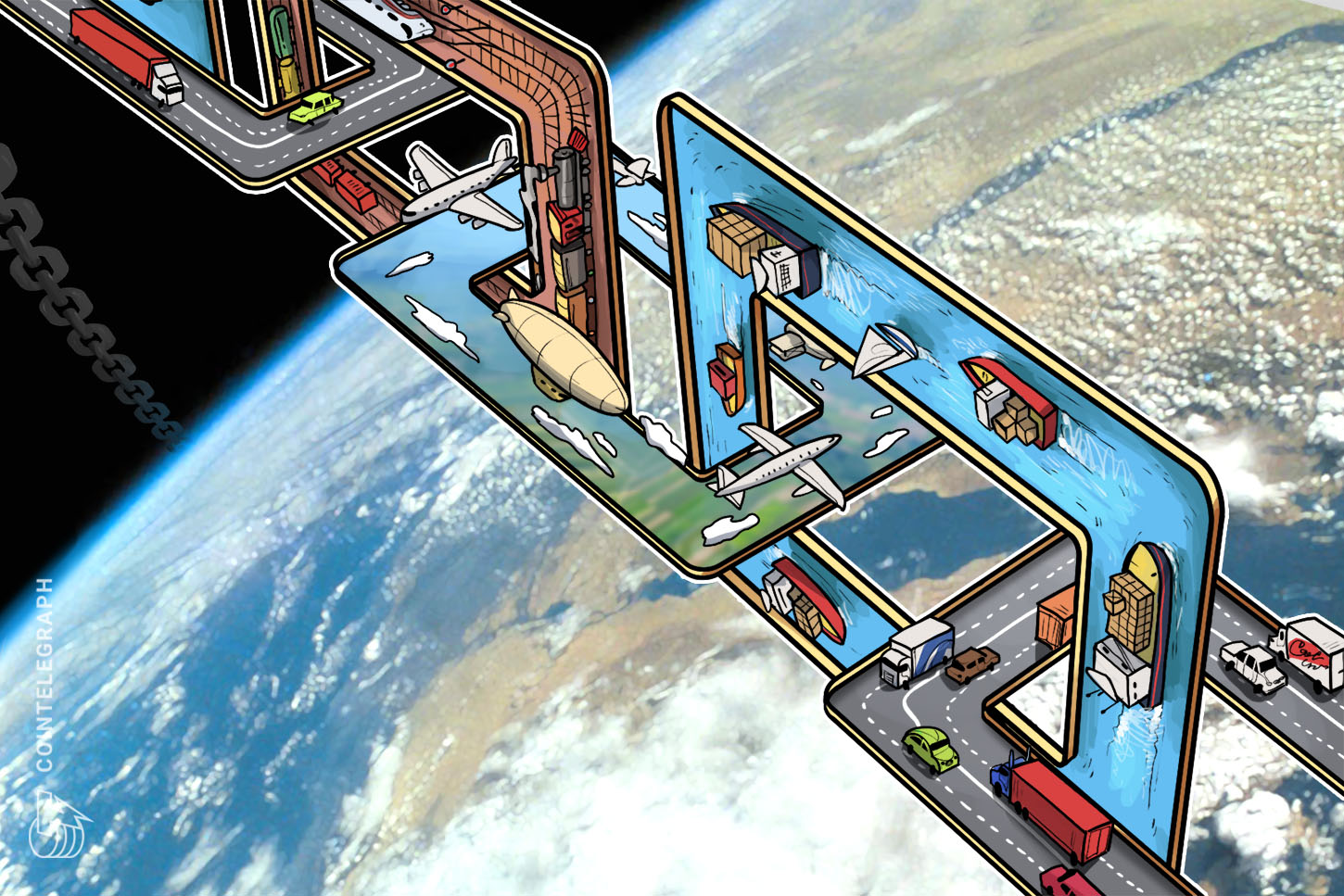 The Port of Rotterdam’s blockchain subsidiary, Blocklab, has been trialing a decentralized electricity trading system to help lower costs and optimize the use of renewables on its microgrid.

The system, called Distro, has been jointly developed by Blocklab and S&P Global Platts, and has been operational as a trial for two months.

Distro uses blockchain technology, smart contracts, and artificial intelligence to support the decentralized and high frequency trading of renewable energy by commercial consumers looking to optimize and manage their energy use. It matches demand with the intermittent power generated from different sources, specifically solar and battery storage.

Each market participant is allocated an AI energy trading agent that learns their behavior, choices, and needs and provides them with energy at the optimal price. Buyers and sellers can access localized and dynamic prices for energy and the system is designed to deter excessive power consumption when generation is low by offering lower prices when the supply is abundant. Blocklab says this builds upon  “proven practices in commodities and financial market[s],” optimized through AI to automatically balance supply and demand.

The trial involved 20 million blockchain-validated, cleared and settled transactions, which cumulatively lowered the cost for commercial users by 11% and improving local renewables producers’ revenues by 14%.

Significantly, use of the system increased the consumption of on-site solar generation by 92%, which Blocklab argues can help to combat energy waste. Most ambitious is the claim that Distro could ostensibly help enterprises to deliver a “carbon reduction saving of up to 30 million tonnes.”

Balancing local electricity needs with local generation holds the key to unlocking significant grid infrastructure savings. We are excited about the prospects of scaling this solution and the meaningful contribution it can make towards helping The Port of Rotterdam become carbon neutral by 2050.

Smart contracts are used in the high frequency trading system in order to enforce market rules, validate transactions, and manage digital identities. The immutable and transparent properties of blockchain, combined with provisions for privacy and cryptographic verification, will hold up to industry audit requirements, write Blocklab and S&P Global Platts.

A banking environment for virtual accounts used for transfers in the marketplace was provided for by ABN AMRO’s Banking-as-a-Service sandbox.

As Cointelegraph has previously reported, the Port of Rotterdam is no stranger to blockchain technology. This summer, the port launched a pilot to tokenize traditional shipping PINs, and has also been one of the major international ports to become involved with the blockchain logistics platform TradeLens.

How 5G Will Impact Customer Experience?

You can now Request the PlayStation VR Camera Adaptor for PS5

Caitlin Long’s Avanti Becomes the Second Crypto Bank in the US, Open for Commercial Clients in Early 2021

StackRox Announced the Release of KubeLinter to Identify Misconfigurations in Kubernetes

How Was 2020 Cyber Security Awareness Month?

MyJane Collaborates with Hedger Humor to Bring Wellness and Laughter…

The Importance of XR Influencers

Head Back Underground in 2021 With Cave Digger 2: Dig Harder

Three technological advancements that we might see in online betting

Why do people prefer to use iOS for betting rather than Android?

What The Meme? Top Meme Generators To Help You Make That Perfect One!