President Donald Trump’s rally in Tulsa, Oklahoma, Saturday, was billed as his big comeback from the crises that have beset his administration in recent months.

But instead of a packed 19,000 capacity stadium of cheering supporters, the president was greeted on Saturday night by the sight of rows of empty seats.

Attendance was so poor that the president had to scrap plans to make a speech outside the venue, where expected crowds of supporters who couldn’t get into the stadium failed to show up.

On Twitter, Trump’s campaign manager, Brad Parscale, blamed “radical protestors, fueled by a week of apocalyptic media coverage,” claiming they stopped Trump supporters getting into the venue. Reporters at the scene said the anti-Trump protests in the city were relatively small.

On the platforms, teenagers have been reserving tickets for the rally – with no plans of actually showing up.

Key to the campaign, reported The New York Times, is the huge online network of fans of Korean pop music — K-pop. In recent months, they have pivoted from celebrating their favorite groups and artists to political causes, such as swamping right-wing hashtags and raising millions for the Black Lives Matter movement.

The Trump campaign had called for supporters to sign up for a free ticket to the rally using their mobile phone in a June 11 tweet, and K-pop fan accounts urged people to do so to prank the campaign.

But it wasn’t a teenager who played the key role in rallying support for the prank — but Mary Jo Laupp, a 51-year-old grandmother, living in Fort Dodge, Iowa. In a TikTok video that went viral, she urged people to take part, racking up hundreds of thousands of likes.

Laup told CNN last week she had worked on Democrat Pete Buttigieg’s presidential campaign. It was Trump’s initial decision to stage the rally on Juneteenth (a decision that he later reversed), the date marking the end of slavery, that inspired her to act.

On TikTok a meme has been spreading, where users post a picture of their Trump rally reservation ticket, which they don’t intend to use, and dance to 1993 pop hit the “Macarena.”

Parents on Twitter shared stories of their kids taking part in the viral campaign.

“The teens of America have struck a savage blow against @realDonaldTrump. All across America teens ordered tickets to this event. The fools on the campaign bragged about a million tickets. lol,” tweeted veteran Republican strategist Steve Schmidt.

Parscale had previously bragged of the huge turnout expected at the rally, tweeting on June 14 that the event was the “biggest data haul and rally signup of all time by 10x.” The campaign uses data like mobile phone numbers used to sign up for tickets to target adverts and propaganda to supporters.

But in videos, K-pop fans and teenagers had provided tips on registering for the tickets with mobile numbers that weren’t the ones they regularly use, to avoid being spammed by the campaign.

We may never know to what extent the viral campaign responsible for the Trump rally flop on Saturday. But it seems likely that a lot of that data haul Parscale boasted of won’t be particularly useful to the Trump campaign.

The coronavirus pandemic and an economic crisis could lead to a famine in the country, The Telegraph reported.

Since October, the Lebanese pound has lost 80% of its value.

“Before the dollar crisis, my monthly salary as a freelance accounting assistant would last 15-20 days. Now it’s only enough for five days. I think they will probably make us all leave our jobs at the end of July… my family are already past the minimum that we can survive on. We borrow from the market to eat for the rest of the month,” Mohamed, a 30-year-old Syrian economics teacher told the Telegraph.

Since October, when the country witnessed the beginning of anti-government protests, the price of food rose by 56%. The Telegraph reported that by the end of April more than half of the population in the country was having a hard time getting food, according to a UN report.

According to Reuters, a third of a million people in the country of nearly 6 million have already lost their job since October.

France24, added that in 2019, almost half of the Lebanese population was living in poverty, but it’s estimated that that could soon reach 75% of the population, according to the World Bank.

While the pound is generally valued at 1,500 to a US dollar, it has been trading on the black market for upwards of 4,000, The National reported.

According to The National, bread prices increased by 33% this week, and many are worried that other subsidies like medicine and gas could also increase.

AlJazeera reported that this is the first time in a decade that the price of bread has gone up.

“If you go to the supermarket you will start crying. Everyone I know is depressed,” Talin Kanledgian told The National.

Many, who are able to leave are considering heading to other countries now that the airport has reopened.

“I don’t want to leave again but I have a family to look after,” a Lebanese surgeon, who holds a French passport, told The National.

The situation in the country has gotten so bad that last month Ethiopian maids were dumped outside the Ethiopian embassy in Beirut after their employers couldn’t afford to pay them anymore.

Reuters reported that while there were efforts to negotiate relief from the International Monetary Funds, those efforts “hit the rocks.”

The government in Victoria, Australia, will provide $3million for an investigation into the spread of coronavirus in a  hotel that was hosting quarantined travelers after allegations that employees did not follow protocols and allegedly even had sex with some guests under lockdown, CNN reported.

According to a press release from Victorian Premier Daniel Andrews site, genomic sequencing linked a number of coronavirus cases to the hotel quarantine program, and one of Victoria’s “most experienced and respected judicial officers” was brought in to investigate.

The hotel quarantine program places returning travelers in isolation for 14 days in a hotel to monitor for the coronavirus.

While the statement did not specify what misconduct took place, the Australian Broadcasting Corporation reported possible sexual relations between employees and guests who were isolating. The outlet also claimed that families were allowed to go between rooms.

Australian broadcaster 9 News’ “Today” show reported that one security guard who was on contract got only five minutes of training before starting.

“There are two cases where it appears that there have been clear breaches with significant ramifications,” Australia’s Minister for Health Greg Hunt said according to CNN, but he did not confirm the allegations.

At least 31 cases were linked to the Melbourne’s Stamford Plaza Hotel, ABC reported. Additionally, two other hotels had infections linked to them.

“It is abundantly clear that what has gone on here is completely unacceptable and we need to know exactly what has happened,” Andrews said in the statement.

The statement said for the next two weeks, as the program is reset, no new international returned travelers will arrive in Melbourne.

In a transcript of an interview posted on Australia’s Department of Health, Hunt said that if the statements are true “that would be completely and utterly unacceptable.”

He added: “And we would encourage the Victorian authorities to throw the book at them if any of these individuals or the firms have behaved inappropriately. Right now there will be a judicial inquiry, and we welcome that, we endorse that.”

According to The New York Times, a new coronavirus outbreak in Victoria prompted new restrictive measures, with 77 new cases Thursday, the highest since March. According to the Times, 300,000 people are now back under lockdown and the reopening of state borders is postponed. 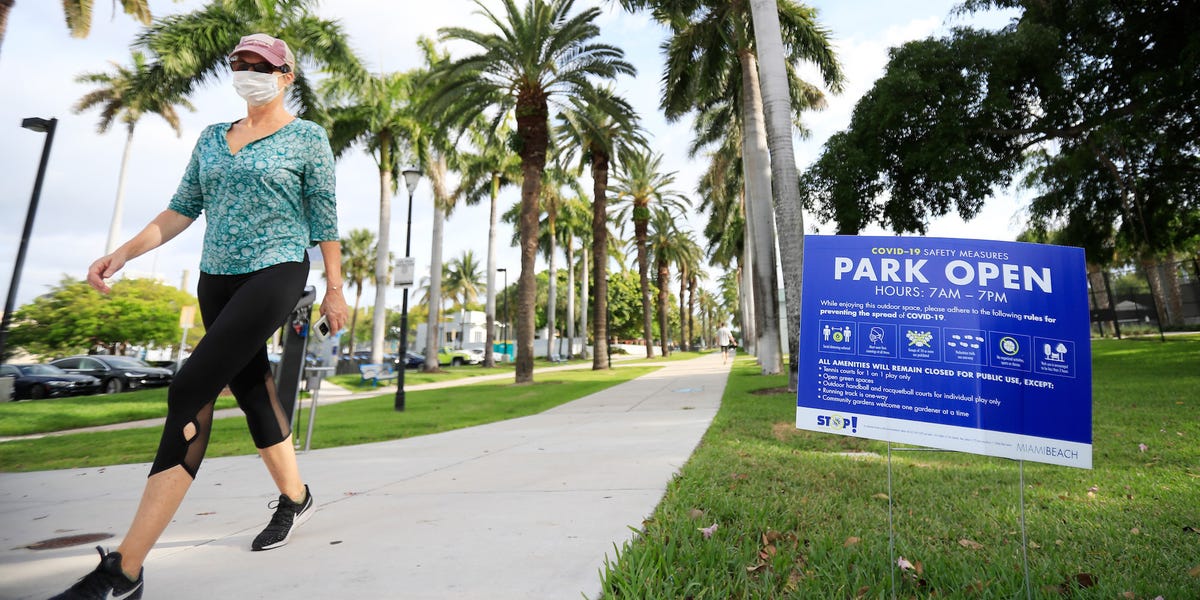 Miami-Dade County is closing casinos, bowling alleys, and strip clubs ahead of July 4, with Mayor Carlos Gimenez announcing Thursday that he will also be imposing a 10 pm curfew.

“I agree with my medical advisers that young people and their parents are not taking seriously the New Normal rules,” Gimenez said in a July 2 statement. The curfew, which ends at 6 a.m., “is meant to stop people from venturing out and hanging out with friends in groups, which has been shown to be spreading the virus rapidly.”

The move marks a reversal for the county, which began allowing non-essential businesses to begin reopening on May 18. That has been linked to a surge in COVID-19 cases; the state on Thursday reported over 10,000 new cases for the first time.

Previously, the Miami Herald reported, Gimenez had criticized public-health curfews imposed in nearby cities. But he imposed one himself after civil unrest related to the police killing of George Floyd.

Earlier in the week, Dr. Mark Supino, a physician at Jackson Health System in Miami, told Business Insider that the uptick in coronavirus cases appeared linked to the policy of reopening embraced by Gimenez and other Republican leaders in the state, including Gov. Ron DeSantis.

“When everything started to open up and ease up, then our volume picked up,” Supino said earlier in the week.

Have a news tip? Email this reporter: cdavis@insider.com

Getting a grasp on India’s malaria burden

Is the future of Insurance in Blockchain?

Vulnerability in Ravencoin Creates Extra 1.5% of Maximum Supply for Hackers

Set Your Alarms: Most Bitcoin Is Now Traded During These Hours

Bitcoin’s Flash Crash Could Send it to Range Lows

Four reasons to be interested in Big Oil companies, according to Goldman Sachs

Ventilator challenge: How businesses are repurposing themselves amid the coronavirus crisis

U.S. economy is not out of the woods, fund manager warns

Trio of fintechs sign up to Mastercard’s Open Banking Protect

Cardano (ADA) Is Forming the Signal That Preceded a 75% Crash: Analyst