Software that demands money with menaces has hit the big time 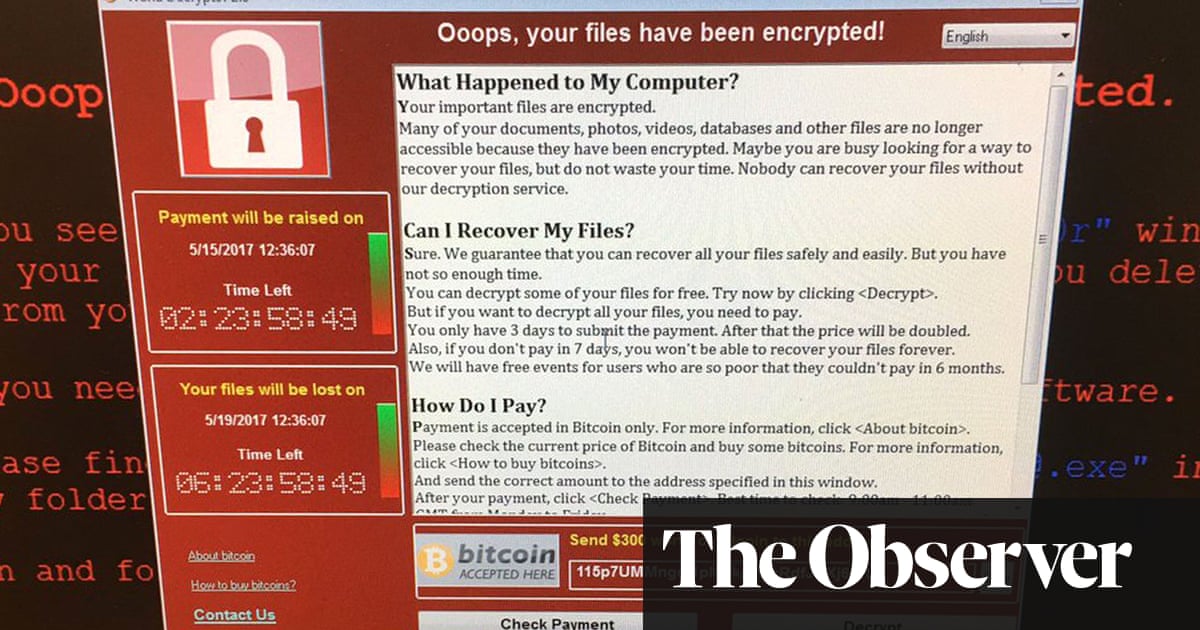 Cyber-attacks that threaten to publish a victims data or block access to it unless a ransom is paid have grown internationally since 2012.

Hackers attacked Travelexs network on New Years Eve, stealing customer data including dates of birth, credit card information, and national insurance numbers. The ransomware gang responsible, Sodinokibi, has demanded 4.6m in return. The currency exchange service has yet to respond; its websites across Europe, Asia, and the US remain down for planned maintenance.

The first significant ransomware attack on a grand scale, CryptoLocker spread via infected email attachments from 2013 to 2014, encrypted private user data and demanded payment in exchange for the decryption key. Infecting more than 500,000 machines, its operators are believed to have extorted around 2.3m.

This targeted computers running the Microsoft Windows operating system in May 2017: within a day, it had infected more than 230,000 machines in more than 150 countries. In the UK, where about a third of NHS hospital trusts were affected, the attack is estimated to have cost the health service 92m.

In 2019, the Baltimore city government found its computer systems hacked by an aggressive ransomware variant known as RobbinHood, with its operators demanding 13 bitcoin (roughly 78,600) in exchange for restored access to information. The attack disrupted property purchases, water bills, and city charges, eventually costing the city 13.8m.

Named after a demon from anime series Death Note, Ryuk made almost 500,000 in two weeks by attacking organisations that worked on tight deadlines. This included the LA Times and a North Carolina water firm. While its source code was derived from a product of the North Korean Lazarus Group, it is thought Ryuks originators are Russian. Jonathan Chan

Will This Be the Year of the Branded Cybercriminal?

According to a biography ‘Finding Freedom’, Russian hackers reportedly stole 100s of photos and videos related to the marriage of Duke with Duchess of Sussex that includes some snaps related to the Queen of Britain.

Authored by Omid Scobie and Carolyn Durand, the biography gives us details on why Prince Harry chose to depart the royal life to lead a quiet living in United States along with his newly born son ‘Archie’ Harrison Mountbatten Windsor and wife Meghan Markle.

Coming to the data leak, the breach is a wake up call to the entire world on how hackers could invade into the personal lives of celebrities without their knowledge to create havoc thereafter.

Cybersecurity Insiders has learnt that the stolen photos were related to the wedding photographer Alexi Lubomiriski, hired to digitally capture the wedding of the Duke with Meghan in May’18. Around 200 photos related to the Prince’s wedding were stolen by a computer programmer based in Russia out of which many were ‘outtakes’ meant to be directed to the computer trash can.

The biography specifies that the memorabilia were siphoned from a cloud account owned by the marriage photographer and includes pictures taken by Harry and Meghan along with the Queen at the wedding.

A photo sharing website named Tumblr is seen displaying a few of the stolen pictures possibly leaked by the hacker.

An inquiry into the data breach and leakage of wedding photos was launched by the law enforcement in Britain after it received an official complaint from the authorities at the Queens palace.

Note- In June 2019, hackers somehow managed to infiltrate the personal computer of the New York based fashion photographer Alexi Lubomirski well- known in the fashion community of London for digitally capturing the lives of Scarlett Johnson, Jennifer Lopez, Britney Spears, Natalie Portman on many ocassions/events.

On the very first day of virtual learning, a Texas school district has made it official that it became a victim of a cyber attack that disrupted virtual classes for 48 minutes. However, the good news is that the IT staff of the school district was swift enough to thwart the Denial of service cyber attack, neutralizing its repercussions to full extent.

The school district that is in discussion is based on the City of Humble, Texas, United States and is known as ‘The Humble Independent School District (Humble ISD) ’.

Liz Celania- Fagan, the Superintendent of Humble ISD, has confirmed the incident via twitter and informed the world that the virtual classes that were impacted by the cyber incident were back online after a break of nearly an hour.

Meanwhile, The Federal Bureau of Investigation (FBI) has issued a nationwide alert that all school districts that are planning for virtual classes for this academic year should take adequate Cybersecurity measures as there is a high possibility that their servers might be targeted by ransomware.

“As many of the K-12 schools are planning virtual classes from September, it makes them vulnerable to cyber attacks such as ransomware”, says Corey Harris, a special agent of FBI.

There is a good chance that hacking groups might be after social security numbers and other faculty or staff info added Harris.

Hope, the CIOs or CTOs of school districts have taken a note of the ransomware alert issued by FBI targeting K-12 schools.

[ This article was originally published here ]

This blog was written by an independent guest blogger.
Digital signatures have been around for decades, but recent events have put them back in the spotlight. They were heralded as the future of cybersecurity as far back as 1999, but in the intervening years came to be somewhat taken for granted by security engineers. Not any longer: the massive move to home working precipitated by the Covid-19 pandemic have forced many to take a fresh look at the security value of digital signatures, why they matter, and their relationship to encryption.
We thought we’d do the same. In this article, we’ll give you a refresher course on how digital signatures work, why they are important for security, and what the future holds.
How do digital signatures work?
Digital signatures, at the most fundamental level, are mathematical algorithms used to validate the authenticity and integrity of an electronic message….