The end of 2021 was horrible for the marijuana industry, is there anything good to look forward to in 2022?

The end of 2021 was a trainwreck for the cannabis industry, as we wrote in our piece, the “The Horrendous, God-Awful, Trainwreck End to 2021 for the Cannabis Industry”. Were we being too harsh, are there positive vibes and momentum in 2022 for any good cannabis news at the Federal level?

But with a gun-to-my-head, “you must be an optimist”, what would you pull out of the rubble of the 2021 ending and hold out hope for the future?

Fine, here goes, let me take off the curmudgeon hat and try to be more like Ebenezer Scrooge at the end of the movie and not the beginning.

First, there are no victory dances for a new medical state or if a medical state adds recreational.  Democrats had the complete trifecta at the Federal level, and we didn’t get ANY movement on cannabis legalization, not even the incremental stuff like Safe Banking and any type of expungement goals. Saying 2022 looks great at the state level for the marijuana industry is the wussification of the cannabis industry, and “everyone gets a participation medal” award.  A new medical state, great! A medical state opens up rec, great!  The problem is that we are down to only about 8 states that don’t at least have a medical program, and each of those states has about 45 people that live in them.  Once Florida rec gets sorted and opens up, you will have almost 70% of people in America with access to recreational marijuana. If you add in access through medical programs, you hit almost 95% of the population.

Go through you list of the most populated states and check for rec and medical programs. California, which happens to have almost as many people as the entire country of Canada living within its border, has had medical for 20 years and recreational cannabis for over 5 years, now. Florida (once rec gets going), Illinois, Massachusetts, New York, Colorado, Oregon, Washington, Nevada, Virginia, New Jersey, Pennsylvania, Maine, Oklahoma, and at some point, you run out of people that don’t have access. The state wars were won over the past 8 years, some stragglers still to come this year, but we can’t get to the end of 2022 with 3 more states with medical or recreational programs and say it was a good year, no way.

The Boy Scout badge for a medical program in a state is no longer a victory, we must up our game.

First big point to build on is that voters want it legalized.  At last check we were around 75% of Democrats, 55 to 60% of Republican voters, and 60% of the general population wants weed to be legal. In theory, that means our elected officials should hear our voices and do as the voters unanimously want, right?  Well, there is way too much money at stake between Big Pharma, Big Alcohol, Big Tobacco, Taxation rights, unions, and a host of other greedy groups that want to make their next million off of weed. Eventually we will elect officials that hold our point of view on cannabis legalization, and they will eventually make it happen if enough of them are voted into office. That could be in 2023, 2027, or 2030, we just don’t know the power and money moving behind the scenes. If it was up to the voters, we would already have Federally legal cannabis, but as we have seen that last 18 months, it is not up to what the voters on both side of the aisle want.  The good news is that the overwhelming majority of voters want to legalize marijuana, so eventually it will have to happen.

The second positive to lean on going into 2022 is that people love marijuana in general. Sales are booming on the legal and illicit market; everyone seems to have a plug now or knows how to get weed one way or the other.  The states are reaping huge tax benefits from legalization at the state level, and they have no interest in seeing those billions of dollars in marijuana taxes going away anytime soon. The masses will continue to buy cannabis, at the expense of other recreational goods such as alcohol and tobacco, so the demand and enjoyment of the product shows no signs of slowing down in the near future.  With more and more medical benefits being studied each day, the medical uses for cannabis will only continue to rise and patient counts will go up, not down.

Third, eventually the forces that are keeping marijuana from being legalized will get their plans in place and give the word that it is now time to legalize. If you believe Big Pharma, Big Tobacco, and Big Alcohol, and groups like Citizen’s United, are keeping cannabis illegal until they are ready and have made all their bets and investments, when eventually they will be set up how they want to be in the marijuana industry before legalization and they will give the go ahead to guys like Mitch McConnell and tell them they want to see cannabis legalized.  As we have said in previous pieces, cannabis will be legalized when Senator Mitch McConnell says it will be legal. Period.

Some articles and pontificators like ourselves have suggested that all the loses means there is hope for a big gain in 2022 on the Federal level.  With mid-term elections coming up and likelihood the Democrats lose a few seats here and there based on vaccines, masks, Joe Biden, etc., means the wall will get steeper, not easier to climb in 2022.

Is there any catalyst that makes the Biden administration jump up and legalize cannabis in 2022? Not really.  Except for a major drug company coming out and saying cannabis is very effective in fighting some version of COVID or helping in COVID symptoms, there just isn’t any incentive in 2022 for President Biden to jump through hoops to make sure marijuana gets legalized at the Federal level. What about tax revenue? Interesting but he had a COVID wave for 18 months and has been in office for over 300 days, if tax revenue was a burning issue, it would have shown itself in the public arena already at the Federal level.

Outside of a cannabis COVID miracle or a mad dash for Federal tax revenue that has not been announced, be prepared for the Grinch in December of 2022.

THE CANNABIS TRAINWRECK THAT ENDED 2021, READ THIS! 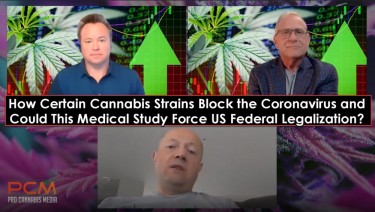 DR. KOVELCHUK LOOKS AT HOW CANNABIS CAN FIGHT COVID!