“We’re discussing how to get legislation introduced that would give active CDL holders an addendum permit to their license that would be connected to their concealed carry gun permit,” explained Ingrid Brown, who oversees safety education for the United States Transportation Alliance (USTA).

“The point would be to allow drivers to carry a concealed weapon in their truck – not in just the concealed-carry permit state that they’re from, but across all 48 states that allow for concealed carry within the state.”

Brown, an independent owner-operator, said that gun laws have always been a topic of discussion among drivers. But dangers to truck drivers posed by protesters demonstrating against police brutality sparked renewed discussions among USTA’s board members about easing federal gun restrictions, Brown said.

Earlier this week, Marcus Sommers, a USTA board member, was ambushed by gunfire while driving his rig along I-70 in Ohio in an incident unrelated to the protests. Sommers was not physically hurt, but Brown said the event created even more urgency around concealed carry.

“If I’m on the street waiting to get into the shipper or the receiver, how do I protect myself? We want to do as much of our own homework and research and education on this issue so that we can bring more awareness not just to local and state governments, but also to Congress, on what we’re dealing with out here and how we’re dealing with it.”

An informal survey taken earlier this week by FreightWaves polling a mix of owner-operators, company drivers, and fleet owners revealed that easing restrictions on concealed carry to be widely supported in the industry even by those associated with larger trucking companies that may be more likely to have strict weapons policies in place.

Concealed carry became more controversial, however, when respondents were asked whether internal company policy would be adjusted to allow drivers to carry a concealed weapon if laws regulating concealed carry were to be relaxed.

But Brown contends that while company policy would likely override a federal law, “giving a driver with a CDL the specific right to concealed carry across state lines would provide more leverage on this issue,” she said. “Our greatest hope would be for companies to see what’s going on out there with a potential law that gives them a reason to change their own policy for drivers that want that protection.”

Concealed carry reciprocity legislation aimed at the general public is currently pending in both the U.S. House and Senate. The House bill does not directly link CDLs to concealed carry permits but truckers would benefit from the proposal’s provisions, according to U.S. Rep. Richard Hudson (R-North Carolina), who introduced the legislation in 2019.

When an out-of-warranty EV fails, who you gonna call?

Rivian released details of the R1T pickup truck’s interior, specifically those quipped with the company’s Adventure Package and Forest Edge interior. Based on the features outlined by the company, it is evident that Rivian brought its A-game when it fitted the all-electric pickup truck with its features and amenities.

Immediately noticeable in the R1T is its generous number of storage options. In both the first and second row, storage spaces are abound. There’s an open 14×11-inch space under the center display, a 33-inch wide storage bin under the R1T back seats, and smaller storage pullouts under the driver and passenger seats. These are complemented by four retractable cup holders and space for one 40-ounce water bottle in each door’s cargo compartment.

Similar to Tesla’s interior, which keeps sustainability in mind, the Rivian R1T is fitted with vegan leather seats. Even the vehicle’s microfiber headliner is made from 100% recycled materials, and its lightweight Chilewich floormats are designed to be easily taken off, hosed down, and replaced. These, together with other smudge-resistant accents in the interior, ensure that owners can keep their R1Ts (relatively) clean while they enjoying the outdoors.

The R1T’s main controls are accessed through the all-electric pickup’s 16-inch center display, which provides pertinent information such as weather and climate controls thanks to its 4G connection. A 6.5-inch rear display, placed at the back of the center console, is also present. Six USB Type-C ports are placed around the cabin: two in the center console, two in the rear center console, and two more in the back of the front seat headrests. A wireless charger is also available, as well as a 12V outlet and a 120V outlet. 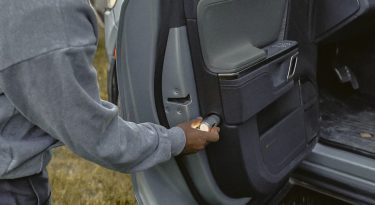 A possible favorite feature of Rivian R1T could be its capability to act as a Wi-Fi hotspot using its onboard 4G connection. This feature would likely be appreciated by owners who tend to travel with kids that love to access their favorite streaming services on their devices. Other toys and tools in the vehicle include a 1000-lumen flashlight and a weatherproof Camp Speaker with a dedicated low bass campground mode to keep owners’ sonic footprint from disturbing wildlife and fellow campers. An optional 130-piece Rivian Field Kit, which includes emergency essentials like a rescue blanket, poncho, and fold-up shovel, is also available.

The full details of the Rivian R1T Adventure Package with Forest Edge interior could be accessed here.

The Supercharger route spans a little over 3,100 miles (5,000 kms) with 27 stations. Tesla China announced the opening of the route via its official Twitter account.

Tesla’s video about China’s longest Supercharger route depicts travelers driving through historical sites “to revive historical epics.” Tesla China’s Supercharger Team has been focused on expanding Tesla drivers’ reach by placing stations in the most exciting locations. For instance, earlier this year, the Supercharger team announced a route leading up to Mt. Everest’s base camp.

In 2013, President Xi launched China’s Belt and Road Initiative (BRI) initiative, now commonly known as the new Silk Road. BRI lays out China’s plan to build railways, ports, highways, and other infrastructure that will connect the East with the West. At least 100 countries have shown their interest in the new Silk Road.

The G7 may have plans to create their own Silk Road. Specific details of the G7’s plans have not been divulged as of this reporting.

Tesla stock among biggest potential winners over the next year: analysts

Tesla (NASDAQ: TSLA) stock is just one of eight companies poised for a rally over the next twelve months, according to analysts who see major upside for some of 2021’s slowest movers.

Tesla, along with Penn National Gaming, Etsy, Mosaic, Mohawk Industries, Under Armour, Enphase Energy, and Freeport-McMoRan, is one of the stocks that has not had a great start to 2021 and has suffered a significant slide in comparison to the stock’s 52-week high. A report from Investors.com says that Tesla is poised for a big 52-week stretch as the automaker could hit its stride through major product developments over the next year that should provide a substantial boost to the company’s stock.

Tesla stock has not performed well in 2021, down 14.28% on the year at the time of writing. Interestingly, Tesla’s meteoric rise in 2020 still puts the automaker’s stock at 214.52% in the black over the past 52 weeks. Tesla shares exploded last year even though the COVID-19 pandemic struck. Despite last year being extremely tough for many companies, Tesla continued to report growth, profitability, an increasing adoption of electrification.

2021 hasn’t told the same story, unfortunately. Although Tesla has proven growth and profitability for seven consecutive quarters, released new, groundbreaking products like the 4680 battery and the Model S Plaid, the stock hasn’t been affected much for some reason. At least not in the positive direction.

But now, analysts are calling for Tesla to have a successful second half to 2021, and the momentum could continue into the first half of 2022. Shares are down 31% currently since its 52-week and record high of $900.40 a share that was reached in early 2021. Regardless, the shares are only down less than 15% on the year, and analysts expect the stock to hit an upside of 5% in one year, giving it a price of $654.03 per share.

While this sounds low, and many Tesla investors believe the stock could reach numbers as high as $700 or $800 if the company can achieve one million deliveries or production units this year thanks to two new production facilities, analysts have a reason for their prediction.

“No, that’s not a whopping gain for an S&P 500 stock that dominated in 2020. But simply seeing the stock move higher would be a welcome change. Additionally, analysts think fundamentals back up their target. Tesla’s profit is expected to jump more than 45% just this year to $6.68 a share. Profit growth is propping up Tesla’s still decent 75 IBD Composite Rating.”

Unfortunately, Tesla stock has lagged over the first six months of the year, plagued by media coverage that hasn’t necessarily told the most candid stories regarding the company. Everything from Teslas being banned on Chinese government bases to potential brake problems in China to a six-month delay at the German facility known as Giga Berlin have halted Tesla’s potential growth on Wall Street. Many of these claims have been disproven, yet the automaker hasn’t been able to rebound on Wall Street, not recovering to its record highs.

Tesla stock among biggest potential winners over the next year: analysts

Tesla will hold an Artificial Intelligence Day, according to CEO Elon Musk, who said it would occur in “about a month or so.”

Musk also stated that the company “will go over progress with Tesla AI software and hardware, both training & inference. Purpose is recruiting.”

Looking at holding Tesla AI Day in about a month or so. Will go over progress with Tesla AI software & hardware, both training & inference. Purpose is recruiting.

The news of an Artificial Intelligence Day follows Tesla’s Senior Director of AI, Andrej Karpathy’s presentation last night at the 2021 Conference on Computer Vision and Pattern Recognition (CVPR 2021). Karpathy detailed Tesla’s current Supercomputer that is assisting the company’s Neural Network store some of the most important data for Tesla’s mission to introduce fully autonomous vehicles in the coming years.

Interestingly, Musk noted in his Tweet that the event’s objective is not necessarily to show the strides Tesla has made to the public in its AI program, but actually to entice the world’s engineers and other talents to come work for Tesla. For years, Tesla has tried to recruit high-caliber talent to several of its departments, and the AI team is no different.

In general, anyone interested in working on physical-word AI problems, should consider joining Tesla. Fastest path to deploying your ideas irl.

In the coming years, the Artificial Intelligence team will be a keystone part of Tesla’s overall outlook as a company. As it surges toward self-driving efforts behind the scenes, the company is making obvious steps to prepare real-world drivers for a future in autonomous driving. The most recent was the inclusion of a gaming GPU that could run some of the world’s most powerful games, a demonstration Tesla put on display at its recent Plaid Model S delivery event.

Over the past few years, Tesla has held several days dedicated to the numerous parts of the business it conducts. In 2019, it held Autonomy Day, where it went over the real-world efforts it was making to surge toward a “feature complete” Full Self-Driving suite. Last year, Tesla held Battery Day in September, which was coupled with its Annual Shareholder’s Meeting. Tesla unveiled the next generation of electric vehicle batteries at the event, as the 4680 cell continues volume production at the Kato Road facility and will be implemented into cars at Gigafactory Berlin and Gigafactory Texas.

No concrete date for AI Day has been announced yet. Tesla will likely give more details in the coming weeks.

Why is 25th June critical for Ethereum?

All Characters, Skills, and Abilities in Naraka: Bladepoint

U.K’s crypto-users are growing in number, but do they even understand the asset class?