WASHINGTON/MINNEAPOLIS (Reuters) – Tens of thousands of people took to the streets of major U.S. cities on Tuesday for an eighth consecutive night of protests over the death of a black man in police custody, defying pleas by mayors, strict curfews and other measures meant to curtail them.

Major marches took place in Los Angeles, Philadelphia, Atlanta and New York City as well as in Washington, D.C., near the park where demonstrators were cleared on Monday to make a path for President Donald Trump so he could walk from the White House to a historic church for a photo.

Although rallies on behalf of Floyd and other victims of police brutality have been largely peaceful during the day, after dark each night crowds have turned to rioting, vandalism, arson and looting. On Monday night, five police officers were hit by gunfire in two cities.

Outside the U.S. Capitol building on Tuesday afternoon a throng took to one knee, chanting “silence is violence” and “no justice, no peace,” as officers faced them just before the government-imposed curfew.

The crowd remained in Lafayette park and elsewhere in the capitol after dark, despite the curfew and vows by Trump to crack down on what he has called lawlessness by “hoodlums” and “thugs,” using National Guard or even the U.S. military if necessary.

After the curfew began in New York City, thousands of chanting and cheering protesters marched from the Barclays Center down Flatbush toward the Brooklyn Bridge as police helicopters whirred overheard.

A crowd, gathered at an entrance to the Manhattan Bridge roadway, chanted at riot police: “Walk with us! Walk with us.”

Police in riot helmets, far fewer than on previous nights, watched at a distance from the sidewalk as cars honked rhythmically in support.

On Hollywood Boulevard in Los Angeles, hundreds of people filled the street from curb to curb, marching past famous landmarks of the film center. Others gathered outside Los Angeles Police Department headquarters downtown, in some cases hugging and shaking hands with a line of officers outside.

Los Angeles was the scene of violent riots in the spring of 1992, following the acquittal of four policemen charged in the beating of black motorist Rodney King, that saw more than 60 people killed and an estimated $1 billion in damage.

A majority of Americans sympathize with the protests, according to a Reuters/Ipsos poll released on Tuesday.

The survey conducted on Monday and Tuesday found 64% of American adults were “sympathetic to people who are out protesting right now,” while 27% said they were not and 9% were unsure.

More than 55% of Americans said they disapproved of Trump’s handling of the protests, including 40% who “strongly” disapproved, while just one-third said they approved – lower than his overall job approval of 39%, the poll showed.

Demonstrators face police officers as they take part in a protest against the death in Minneapolis police custody of George Floyd, in the Manhattan borough of New York City, U.S., June 2, 2020. REUTERS/Jeenah Moon

In Minneapolis, Roxie Washington, mother of Floyd’s 6-year-old daughter, Gianna, told a news conference he was a good man. “I want everybody to know that this is what those officers took from me….,” she said, sobbing. “Gianna does not have a father. He will never see her grow up, graduate.”

The head of the U.S. National Guard said on Tuesday 18,000 Guard members were assisting local law enforcement in 29 states.

Floyd died after a white policeman pinned his neck under a knee for nearly nine minutes in Minneapolis on May 25, reigniting the explosive issue of police brutality against African Americans five months before the November presidential election.

The officer who knelt on Floyd, 44-year-old Derek Chauvin, has been charged with third-degree murder and second-degree manslaughter. Three other officers involved were fired but not yet charged.

On Monday night, demonstrators smashed windows and looted luxury stores on tony Fifth Avenue in New York, and set fire to a Los Angeles strip mall. Four police officers were shot in St. Louis and one in Las Vegas who was critically wounded, authorities said.

Officers were injured in clashes elsewhere, including one who was in critical condition after being hit by a car in the Bronx, police said.

The protests come on the heels of lockdowns to prevent spread of the novel coronavirus which hit African Americans disproportionately with high numbers of cases and job losses. 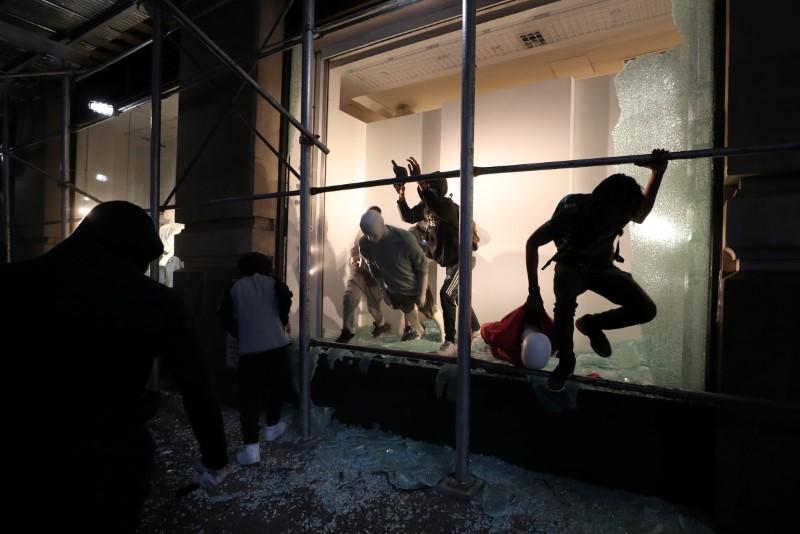 Hexagrams and Wolf No Longer Casting the Overwatch League 2021

These are the teams participating in the F1 Pro Series 2021

The five most shocking roster moves in CSGO history