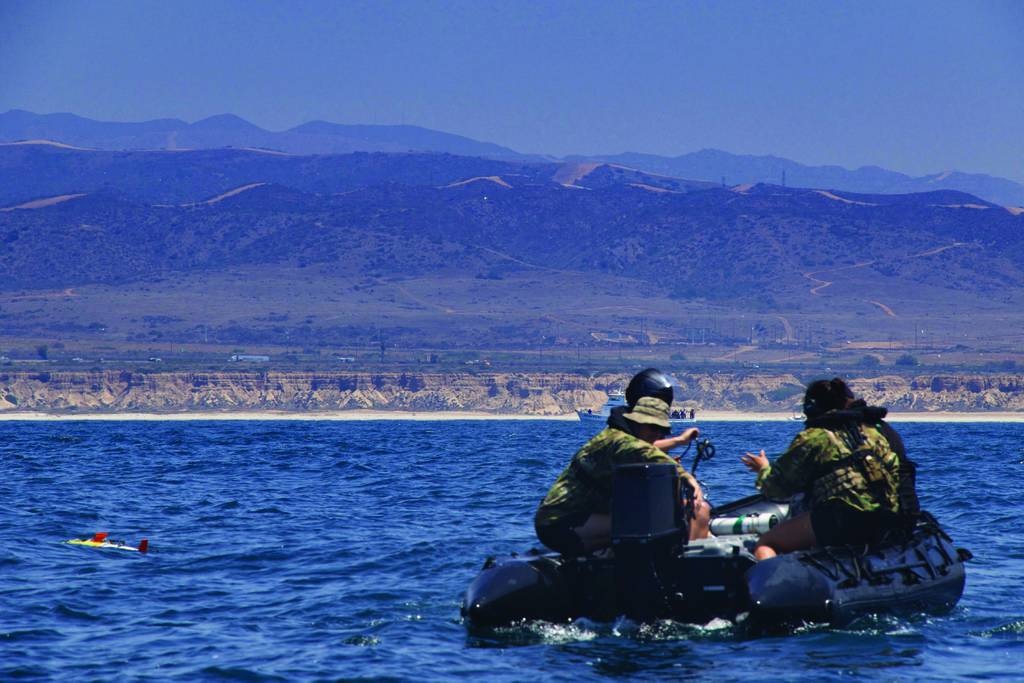 WASHINGTON — The U.S. Navy is moving quickly to link its fleet through its Project Overmatch initiative, which has been kept almost entirely secret for two years.

Shielded from public view, the service has undertaken a flurry of work: simulating current pathways for data, writing software code to close gaps, testing it in a lab and at sea, and providing feedback to coders to improve future iterations.

Rear Adm. Doug Small, who leads both Naval Information Warfare Systems Command and Project Overmatch, told Defense News this high-priority effort remains on track for a planned deployment of the new capabilities to a carrier strike group in 2023.

Project Overmatch is the Navy’s contribution to the Pentagon’s multibillion-dollar Joint All-Domain Command and Control effort — a push to reliably connect forces across land, air, sea, space and cyberspace as well as enable seamless international collaboration.

The fielding of Project Overmatch will arguably be the Navy’s most important work in 2023, especially as the service aims to incorporate more unmanned systems that serve as intelligence-collecting nodes, feeding information to sailors on ships and in ashore command centers.

“The Navy’s effort on Overmatch is very much focused on the next two or three years,” said Bryan Clark, a senior fellow and director of the Center for Defense Concepts and Technology at the Hudson Institute. “Overmatch has really focused much more directly on the near-term operational problems faced by commanders dealing with China.”

Small said he’s optimistic about the upcoming demonstration — the largest of its kind, but not the first time the Navy will use this new technology at sea, noting it continues a critical line of research. With ships inherently disaggregated, he said, the Navy is naturally considering ways to better share information across ships and aircraft so the best-positioned platform can strike a target.

“The Navy in particular had been working various system of systems-type concepts and the technologies that would go into that for mission threads. How do you stitch together various components to create a mission or an outcome, an effect?” he said in a Nov. 10 interview. “Overmatch [is] sort of a natural progression of that sort of work.”

Though the Navy was already researching how to connect ships, planes and weapons, Chief of Naval Operations Adm. Mike Gilday created Project Overmatch in fall 2020 and tapped Small to lead the effort. Gilday has since said Overmatch is his No. 2 priority, behind delivery of the Columbia-class ballistic missile submarine.

Whereas past efforts were housed within specific offices, Small said Project Overmatch is meant to encompass the entire Navy.

“Inside of a platform-centric service,” he said, “how can you become more data- and network-centric?”

The core team started with just a few people, but has grown to about 50. The team, plus its collaborators across the Navy and industry, are focused on several key points: tools and analytics, networks, data, and infrastructure, which includes computing and platforms as a service.

“Fundamentally, this is all about management of data, exchange of data,” David Deptula, the dean of the Mitchell Institute for Aerospace Studies and a retired Air Force lieutenant general, said Nov. 14 at a JADC2 industry event. “Without the appropriate infrastructure, you can’t be able to do the data, connectivity or networking. Without the security, all of it falls apart because you’re yielding a huge weakness and vulnerability to our adversary.”

But perhaps the most significant, overriding mission of the team is to figure out what barriers the Navy has put in its own way.

Small said the commercial industry is able to do what the Navy wants to do; car companies like Tesla remotely send software updates to address security gaps or capability improvements without creating safety risks for drivers, and Amazon pushes out hundreds of thousands of software updates each day, which an online shopper might never notice.

“Everything that we have put in our way that prevents us from doing exactly that is something that we’ve done to ourselves,” Small said. “Now, there are changes that need to happen to systems on ships and shore facilities to enable that, but then, eventually, that’s how you get to fielding.”

Small said his Project Overmatch team should have a client-like relationship with the fleet, where they understand what sailors need to do their jobs more effectively and, in turn, quickly produce and deliver tools to address those gaps.

“Bringing an upgrade every several years, or bringing hundreds of thousands of changes per day — somewhere in the middle, there is that sweet spot where we basically pace our adversaries with delivery of capability. And that’s what it’s really all about,” said Small, noting the difference between the Navy and the tech industry.

Small said his focus is now on the 2023 carrier strike group demonstration. Though he wouldn’t identify specific technologies or software involved, he dubbed the event “the starting gun” and said additional capabilities will roll out in future iterations.

Small said the team will deploy this first increment onto the first carrier strike group in 2023, and then continue until all 11 carrier strike groups have the hardware and software installed. That equates to a large portion of the surface fleet, excluding amphibious ships and some forward-deployed vessels with a different operational model.

“The alternative path is, well, let’s design the whole thing out for a few years and then field that everywhere, right? And you’ve probably seen the [timeline] curves on that, and we’re trying to take a stepwise approach to get there faster,” he said.

“It’s mostly because they don’t want to tip their hand as to what they’re looking to put together,” Clark said. “How they deter China is by increasing the uncertainty on the part of the Chinese, on the [People’s Liberation Army], that they’ll be successful on terms that the Chinese leadership would find acceptable.”

Away from the public eye, Project Overmatch technology has already undergone repeated testing, according to Small.

“Within even the first six months of the effort, we had done some work with the Marine Corps, for example, where we got some real-time feedback and did some connections,” he explained. “We’ve been to individual ships with systems and connected it to our labs to sort of simulate other [ships].”

Pushing Project Overmatch advancements into the real world is vital, according to Clark.

This fall, the technology was used in the Army’s Project Convergence exercise across multiple units, Small said. The weekslong experiment, during which bleeding-edge tech is put through the wringer, represents the Army’s contribution to JADC2. The Air Force, likewise, has its Advanced Battle Management System, an attempt to adopt the next generation of command-and-control tech.

But there are concerns the separate efforts are not properly aligned. An early draft of the annual defense bill included an audit of JADC2, with the House Armed Services Committee’s cyber and innovative technologies panel, chaired by retiring Rhode Island Democrat Rep. Jim Langevin, requesting a study on timelines, goals and potential shortfalls.

The data-centric odyssey is of the highest stakes as the U.S. and allied nations attempt to thwart Chinese and Russian ambitions, officials argue. Beijing and Moscow have each spent significant sums on military science and technology — including artificial intelligence and cyber advancements — ratcheting up the pace at which information must be exchanged and decisions must be made on the battlefield.

“Here’s how I see it: any data, anywhere, any time that is needed. And the vision, when I start to spin this out, is coalition warfare,” Pentagon Chief Information Officer John Sherman said at a Defense Information Systems Agency event Nov. 7. “You have a U.S. Marine Corps [High Mobility Artillery Rocket System] getting a firing solution from an Australian [intelligence, surveillance and reconnaissance] capability; maybe you have a Japanese frigate that’s also going to hit the same target there; you’ve got multinational F-35s coming on station to provide combat air-support capability. All of this is going to have to happen quickly.”

Gilday in October said the Navy is sharing Project Overmatch insights with foreign forces to ensure international communication and collaboration will be possible in large-scale, distributed fights.

Though Gilday did not identify those allies, Small told Defense News his program started with Five Eyes — an intelligence-sharing group made up of the U.S., the U.K., Canada, Australia and New Zealand. Small added that the U.S. has since welcomed other allies and partners to collaborate on software development.

Some ships will have to wait for their next maintenance period to receive hardware and software changes, but Small said his team is working through policy issues to allow for installations to happen pier-side and, therefore, on a quicker timeline. In the meantime, the Project Overmatch team will chip away at the next increment, even as it’s fielding the first.

“Our concept of ‘done’ has to change a little bit,” Small said, “because it’s really not a traditional type of acquisition approach.”

Defense officials have cast JADC2 in a similar light. There is no true finish line, but rather the massive networking endeavor requires a rolling development process to maintain an advantage over adversaries capable of jamming, intercepting and muddying communications.

Sherman, the Pentagon CIO, said the key to JADC2 is speed and stubbornly staying “inside the enemy’s turn circle.”

“This has got to move so fast that the adversary cannot get back up off the mat,” he said. “Maybe they have mass on us, but we have quality of data, quality of capability.”

Megan Eckstein is the naval warfare reporter at Defense News. She has covered military news since 2009, with a focus on U.S. Navy and Marine Corps operations, acquisition programs and budgets. She has reported from four geographic fleets and is happiest when she’s filing stories from a ship. Megan is a University of Maryland alumna.

Colin Demarest is a reporter at C4ISRNET, where he covers military networks, cyber and IT. Colin previously covered the Department of Energy and its National Nuclear Security Administration — namely Cold War cleanup and nuclear weapons development — for a daily newspaper in South Carolina. Colin is also an award-winning photographer.