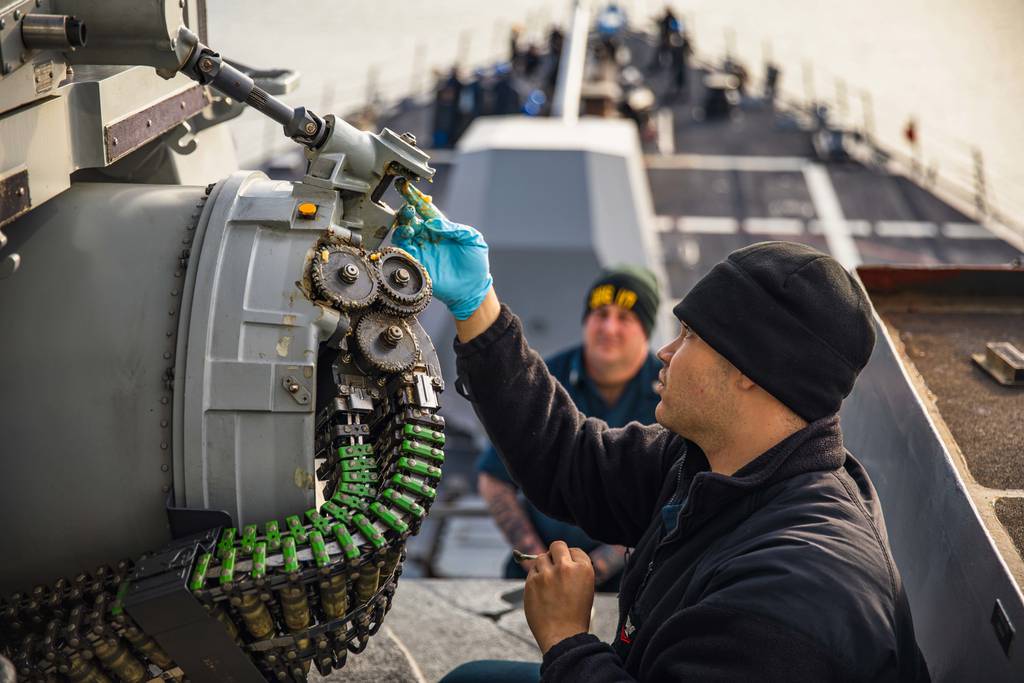 WASHINGTON — The U.S. Navy wants to keep nearly half its surface fleet in a deployable state, as it aims to raise the overall readiness of the force in case it’s called upon to fight.

Commander of Naval Surface Forces Vice Adm. Roy Kitchener last year unveiled a data-driven effort to better understand ship and crew readiness, with a focus on the specific factors keeping ships from being combat credible and the costs associated with addressing those deficiencies.

After a year of crunching the numbers, Kitchener announced this week at the annual Surface Navy Association conference his “north star” goal is to keep 75 surface ships at either “mission capable” or “full mission capable” readiness levels.

Kitchener, in a call with reporters ahead of the conference, said today’s number of mission capable ships is classified. He declined to say how far the Navy is from its 75-ship goal, only saying “we have some work to do” but that the goal is achievable within two years.

The number represents nearly half the total 164 surface ships in the fleet today, according to Naval Surface Forces.

Kitchener told reporters the “goal is not arbitrary. It’s not random. It was born from our investments in our data analytics; we had a really good, thorough assessment across the fleet’s operational requirements.”

Having 75 mission capable ships would not only meet the surface fleet’s requirement to routinely deploy under the command of joint force combatant commanders, but it would also mean additional ships ready to respond to a conflict, conduct experiments with new gear or concepts or participate in fleet exercises.

The 75-ship figure includes the core of the surface navy: Arleigh Burke-class destroyers, cruisers, littoral combat ships, all classes of amphibious ships and the Avenger-class mine countermeasures ships.

It does not include the Zumwalt-class destroyers or expeditionary sea bases, of which the Navy has three of each that are not yet fully integrated into the surface fleet. Those classes could be added into the mix once the Navy learns more about their readiness and costs. It also does not include aircraft carriers, submarines or Military Sealift Command auxiliary ships.

The Navy views its ships and their readiness through the lens of the Optimized Fleet Response Plan, the force-generation plan that guides most surface ship and aircraft carrier deployments. Ships are either in maintenance, in training, deployed, or in sustainment, a time when they’re meant to keep up the high level of proficiency they attained during the deployment.

As the fleet seeks to improve its mission-capable rate, ships in sustainment will be best positioned to help Kitchener meet his goal, his office explained.

Ships on deployment are already mission capable, and those figures are unlikely to change. Ships in deep maintenance are inherently not mission capable — though the Navy could move the needle slightly by driving down maintenance delays and getting ships out of the shipyard faster.

Ships in sustainment, though, often bear the brunt of lack of resources, whether it’s operations and maintenance money running low at the end of the fiscal year, a lack of certain spare parts or shortage of capacity in repair yards. The Navy generally prioritizes ships next to deploy, and though ships in sustainment are supposed to remain ready for any contingency, they’re often the billpayer when one is needed.

With this data, the Navy will be able to see what’s needed to get four destroyers up to the mission-capable status and ready to participate in an exercise, for example. By understanding the deficiencies of each ship, the fleet could also prevent any given ship from straying too far from the mission-capable threshold, meaning even non-mission-capable ships would be in better overall condition than many are today. And, if the Navy wanted to take future steps to become more combat credible, such as conducting more fleet exercises or training on high-end tactics, leaders would have an exact price tag and could work that into budget plans.

During a Jan. 10 speech at the conference, Kitchener said the data has already pointed to several specific ways to increase the number of mission-capable ships.

During fiscal 2022, he said, the Navy filled more than 1,200 requests for ship parts by cannibalizing other ships because the parts couldn’t be acquired through the supply system. That’s up 50% from years, he said, and suggests certain spare parts should be better funded and get closer attention.

In a specific example, he said two communities use the SeaRAM weapon: the littoral combat ships and the destroyers forward-based in Rota, Spain.

“We are having a horrific time keeping our SeaRAMs up on the LCS,” he said, noting he looked into why the LCS was struggling to maintain the weapons but the destroyers were not. “It came down to having the parts onboard, quite frankly. And the right parts onboard.”

Kitchener, speaking to reporters ahead of the conference, outlined a multi-tiered plan to increase readiness: Both Naval Surface Force Pacific and Naval Surface Force Atlantic established Surface Maintenance Operations Centers that will look at trends in ship readiness, prioritize resources to build up current readiness and crunch the data to better inform future funding requests.

Each homeport will receive a new Surface Group unit that will be focused on helping ships get through maintenance and basic training and ensuring they enter pre-deployment training fully ready.

And an upcoming Surface Response Plan will prioritize ships on the waterfront, outlining which ships in sustainment would be the first ones called upon if a crisis arose, allowing the waterfront to ensure those on-call ships are kept in the highest state of readiness.

Megan Eckstein is the naval warfare reporter at Defense News. She has covered military news since 2009, with a focus on U.S. Navy and Marine Corps operations, acquisition programs and budgets. She has reported from four geographic fleets and is happiest when she’s filing stories from a ship. Megan is a University of Maryland alumna.