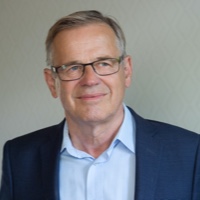 As I wrote in the first post, my interest for digitalisation started off from trying to automate more work in the backoffices. Then it moved to
convenience for e-banking customers > not having to send or receive invoice snailmail and keeing in lenghty details when paying.
It then jumped back to productivity when the Finnish public sector calculated that e-invoicing can save 300m€ (taxpayers’ money!) and the Federation of Industries 2800m€/year. Much more rungs in the
e-invoicing ladder from automated accounting, automated VAT-reporting, automated financing etc. Additional rungs in the ladder. And then the
e-receipts ladder (800m€/year..) – with so many additional rungs – especially once the corporate SSI/ToIP ID/Factwallets are in place. All leading to a new
productivity platform.

These ladders also lead to new sustainability and crime mitigation platforms. And the convenience ladder is not only saving time – also cutting stress and adding transparence and wellbeing.

It is a tall order to try to map out all the (i) very concrete direct and also (ii) dynamic (step leading to the next) manyfold improvements these ladders have led to – for enterprises, the public sectore and in the end for citizens. To picture the next – much bigger step – the Trust Infrastructure – is of course more important. But there may be useful observations from the past to share – and come back to the future later.

Lessons learned: (i) It is not well enough understood and even less made clear that the
citizen pays every cent of all costs in enterprises and the public sector, (ii) that investments in productivity improvements should lead to
lower prices (competion is a mission) and lower taxes
– all other equal. It should be self-evident that (iii) better profitability leads to higher tax income, more investments and more dividends (tax income) – and that
we are all shareholders through pension systems and savings – the biggest capitalist in the world

My work in https://vnk.fi/en/council-of-regulatory-impact-analysis (2014>) has been an eye-opener. Our independent task (we report technically to the prime minister) is to evaluate if the impact (economic and sustainability) analysis of legislation initiatives has been analysed properly – before the package is sent to the parliament. Has the best alternative for reaching a goal been chosen and has experience from other countries been used. Often enough we have had to be quite critical in our public statements.  Similar initiatives have been established also in Germany, Sweden, UK, Norway and several other countries and EU. The general task is to make decisions fact based and leave
less space for vote-fishing populism.

Lessons learned: (i) a rough impact estimate should be done as a first step to prioritize – as there is not enough money and resources for everything, (ii)
digitalization is not understood well by politicians – perhaps as it does not win much votes and there is so much to do > all evaluations should include digital
interoperability with factwallets (iii) ministries have their own agendas and overall co-ordination leaves much to attended to, (iv) the
German model – a standard one-pager including 25€/hour for citizen impact – should be implemted everywhere, (v) EU should have digital progress for SMEs as a top priority, (vi) too much time should not be spent on trying to
calculate every cent – instead worst/best case for costs to implement and for direct benefits and net impact  in one-pager – separately for dynamic effects – all for 1. enterprises, 2. public sector and 3. trickling down to households (adding the 25€/hour and travel cost impact – stress relief difficult to measure – but should be measured to put pressure on clarity)

To then come back to the e-ladders. How much have each one added productivity – rung by rung, combination of rungs and higher thus platforms reached? A doctoral thesis needed for each? Or big enough – move on – and vote for
brave-enough politicians making selfevident good-for-society-at-large solutions mandatory for organisations right away (like e-invoice, e-receipt and now the factwallets). Can we a f f o r d anything else in Europe? Are business organisations driving it properly already? Much of the responsibility lies there – as politicians have the tendency to bow also towards those who do not want progress..