The first look into the LEC in 2023 will be the showmatch at the Kickoff Event.

Riot announced their schedule for the new annual Kickoff Event that will feature all nine accredited leagues yesterday. The two-day special event will take place on January 10-11, with LEC’s own showmatch being scheduled between 5-8 pm CET (8-11 am PT) on January 11.

All ten teams of the league sent a player to represent their organization. The game will bring fans a clash that involves both the veterans and legends of the region and also the rookies freshly entering the league. With LEC having a change this year from a European league to an EMEA league, the game is supposed to “…honor [LEC’s] past while forging [LEC’s] future as EMEA.”

The future and past of the LEC

While there was no captain selection or a draft for the game as the LCK did with their showmatch, the unofficial captains of the two teams seem to be Luka “Perkz” Perković and Carl Martin Erik “Rekkles” Larsson. Another detail is that it looks like player roles were ignored during the selection process as teams have more than one player playing the same role. This might mean players will play off-roles during the game. The full teams are: 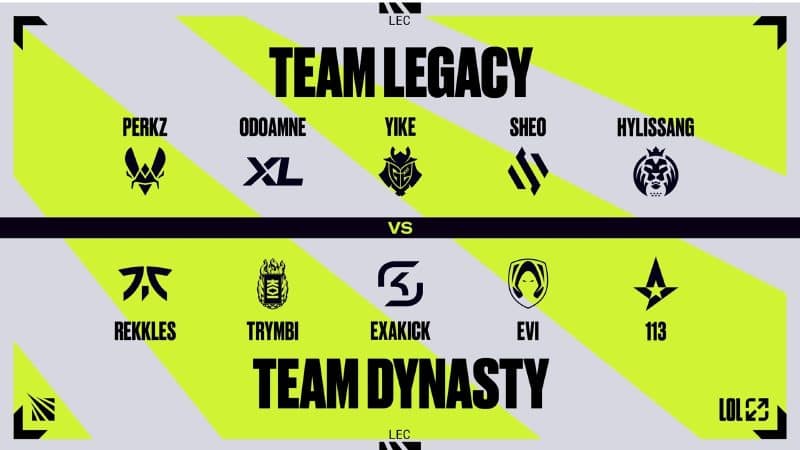 Just like most of the regions, LEC showmatch will be played as a Bo3 on the Summoners Rift, but in a very different manner to your regular pro-play series. Starting with the pick and bans, the games will follow a similar format to the Fearless Draft mode that LDL was trying out. The players won’t be able to pick a champion previously played, but aside from these repeat champions, there won’t be any bans. And to also test the players’ limits, the victors will have to shuffle their role assignments after each game.

There are also prizes for the winners. Each player from the winning team will have the opportunity to design their own custom emote alongside the Game Design team, which will be available for purchase in the League client later this year.

LEC’s exclusive livestream for the Kickoff Event, hosted by Trevor ‘Quickshot’ Henry, will start at 4 pm CET on their TikTok while the showmatch will start the next hour, at 5 pm CET. Fans can tune into the game itself on the lolesports website.

For more LEC and LoL Esports news, follow us on ESTNN.

Infected confirmed to be returning in Modern Warfare 2 Season 02