Interest in Thailand’s insurtech sector is picking up, with companies in the space closing million dollar funding rounds, incumbents ramping up digital capabilities, and foreign companies entering the market.

So far, 2021 has seen two Thai insurtech companies securing funding. The two Series A rounds were closed by Muang Thai Broker (US$6.7 million), the operator of online insurance comparison platform and sales platform Gettgo, and AppMan (US$4.6 million), the operator of AgentMate, an electronic point-of-sale (POS) that digitizes the sales process of life and non-life insurance.

AppMan, one of Thailand’s insurtech pioneers, said it will use the proceeds to expand and develop innovative technologies in the Asia Pacific (APAC) region, including artificial intelligence (AI) for insights screening for insurance and financial services incumbents.

Founded in 2011, AppMan has since expanded across Southeast Asia, opening offices in Ho Chi Minh City, Vietnam, and Jakarta, Indonesia. 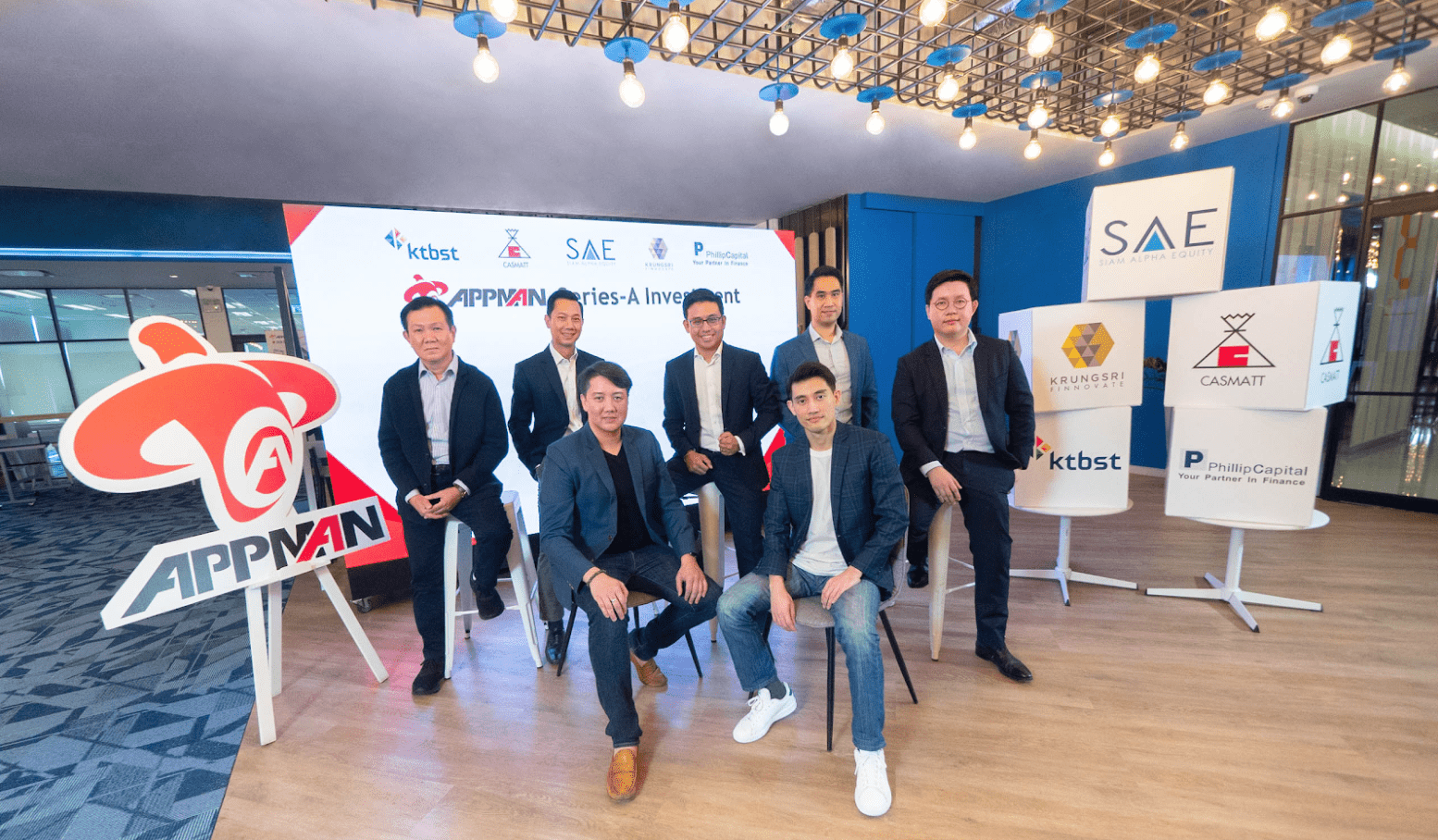 MTB, the only MTGH subsidiary authorized by Thailand’s Office of Insurance Commission (OIC) to sell both life and non-life insurance products, launched Gettgo in 2018 in response to the increasing role of technology and digital platforms in the insurance industry.

MTB said it will spend the capital injection on improving its distribution platform and developing omni-channels to help customers gather information and easily make comparisons between complex insurance products.

Over the past years, the Thai insurtech industry has been supported by regulators which view technology as an enabler for financial inclusion.

The idea for Prakan Kubdee emerged during the global pandemic, Rattapol Gitisakchaiyakul, CEO of MSIG Thailand, said, noting that COVID-19 has forced incumbents to innovate and adjust to “the new normal.”

With Prakan Kubdee, customers can save up to 50% on their motor insurance premiums and receive 24-hour customer support, MSIG said, adding that research has shown that up to 60% of drivers have never been in an accident and have good driving behavior but still end up paying the same premiums as rickers customers.

Promoting innovation in the insurance sector

The OIC launched its insurtech sandbox in 2017 after establishing the Center of Insurtech Thailand for research, technological exchange and insurance product development. The sandbox allows insurance firms and tech firms to beta test their insurtech innovations.

Dr Suthiphon Thaveechaiyagarn, the OIC’s secretary general at the time, said in an interview with Asia Insurance Review that policy makers were “more than ready to amend our regulations if it will yield higher benefits to society,” showcasing willingness to increase digitalization in the sector.

Before these key initiatives, Thailand was already home to several insurtech startups that provided a wide range of services from distribution channels and sales support, to claim handling.

Sunday Insurance is perhaps one of Thailand’s most notable insurtech players. Founded in 2017, Sunday uses machine learning (ML) algorithms to provide customers with a broader range of policies, covering properties and possessions, with highly customized premiums.

Sunday raised US$9 million in a pre-Series B bridge round in September 2020 which it said it would use to grow in its home country, expand to Indonesia and develop its Sunday Service app with health and motor insurance products and services.

Though still relatively small, the Thai insurance sector has grown rapidly over the past years with still plenty of opportunities for players to tap into.

Between 2008 and 2017, gross premiums written grew at an average annual rate of approximately 16.9%, substantially above nominal GDP growth of 9.9% during the same period, according to a 2019 assessment by the International Monetary Fund (IMF).

Several overseas insurtech have expanded to Thailand to capitalize on the opportunity. Singapore’s Vouch Insurtech teamed up with six Thai insurers in 2018 to launch a digital insurance platform in Thailand called FairDee.

Igloo, another insurtech startup from Singapore, recently announced a partnership with Foodpanda Thailand to provide delivery riders with a comprehensive insurance coverage plan.

Formerly known as Axinan, Igloo raised US$8.2 million in April 2020 to broaden its foothold in Southeast Asia. In addition to Singapore and Thailand, Igloo operates in Vietnam, the Philippines, Indonesia and Malaysia.

The agreement, which allows bizmoto agents to “cash-in” money at any one of Cebuana’s 2,500 shop fronts and accredited stories nationwide, will enable agents to ‘top-up’ their mobile wallets instantly, allowing them the ability to transact with more customers.

Essentially, a bizmoto agent will be able to enter any Cebuana branch, choose the bizmoto platform to top-up their mobile wallet and their ‘cash-in’ funds will instantly be credited to their bizmoto wallet.

The significant increase in the number of physical “cash-in” locations for bizmoto agents comes just weeks after Peppermint signed an online”cash-in” agreement with the Bank of the Philippines (BPI).

Under the BPI agreement, bizmoto agents who are BPI account holders will be able to instantly ‘top-up’ their mobile wallet, allowing them to service more customers because they can transact online in real time without the need to visit a BPI branch or automatic teller machine.

The Cebuana Merchant Biller agreement does not earn direct revenue for the Company however Peppermint does earn a fee every time a bizmoto agent performs a transaction utilising the bizmoto platform, which requires a positive balance on the bizmoto agents’ mobile wallet.

Cebuana will earn a fee when bizmoto agents “cash-in” money to ‘top-up’ their mobile wallets at any one of Cebuana’s 2,500 shop fronts and accredited stories nationwide. The agreement is for an initial one-year term which renews automatically unless either party give the other 30days’ notice not to renew.

“It is yet another ‘brick in the road’ as we build out our bizmoto ecosystem, further integrating our bizmoto platform into the established Philippines’ payments industry as we seek interoperability across the digital payments landscape throughout the Philippines.

“Peppermint aims to continue to align itself with strategic and established partners across the Philippines’ payments landscape to ensure the bizmoto platform and ecosystem of services is convenient and accessible to as many Filipino people as possible.”

A small-business finance platform and a cash flow funder have partnered to offer brokers a product where they can access advanced commissions.

Lend.com.au (Lend) has announced that it has partnered with invoice and supply chain financier Butn, to enable brokers to access $5,000 – $10,000 advanced commissions for a fixed fee of $100.

Brokers on the Lend platform can access up to $10,000, with non-Lend brokers able to secure up to $5,000 advanced commissions.

Speaking of the move, Rael Ross, co-founder of Butn, commented: “Like all businesses, we recognise that brokerages, whether large or small, can often gain immediate benefit from a cash injection.

“Getting an advanced commission product is the perfect solution to the common comment of ‘I wish I could be paid my commission now’ to help alleviate cash flow crunches or materialise an opportunity. Particularly at this moment of uncertainty, when smooth working capital is paramount to optimising operations, we’re delighted to offer this great opportunity to support the broker community.”

GoldFund.io (CRYPTO:GFUN), a crypto currency ecosystem for the trading of physical gold as a commodity, announces the reduction of GFUN ERC20 token supply from 10Bln to 2Bln.

Tim Mckinnon, CEO of the GoldFund.io platform said, “The reduction of GFUN tokens by 8Bln tokens has essentially made the GFUN token a limited opportunity to participate. We are progressing toward our goal of funding emerging Gold Miners into production, and additionally making gold available in smaller units to Gold Investors.”

The GFUN token is currently traded on multiple Crypto currency Exchanges and has grown significantly in value since launching in 2019.

Finsure is on track to launch a new tech solution with NextGen.Net’s ApplyOnline that will halve processing times and stop document double handling.

Finsure’s cloud-based broker CRM platform Infynity currently requires brokers to first upload, then re-download documents before they can upload and attach them to an application in ApplyOnline.

“This new piece of technology will enable the documents to be sent concurrently – similar to email attachments – and appear automatically in ApplyOnline,” says Simon Bednar, General Manager of Finsure Finance & Insurance and LoanKit Aggregation.

The solution will also integrate with their new customer portal.

“Our customer portal will allow customers to upload their documents on behalf of the broker. The broker will immediately see the documents in Infynity, confirm they’re correct and hit a button to send them to ApplyOnline along with the application data.”

Bednar estimates a 50 percent time saving, explaining “as part of that process we have a tax file number and sensitive data reduction piece of technology”.

“NextGen.Net work collaboratively with Finsure to ensure our systems talk to each other in a highly sophisticated manner to eliminate double handling and streamline the process from Point of Sale all the way to the lender’s approval,” says NextGen.Net national Customer Account Executive Greg Phillips.

He adds that the seamless integration of ApplyOnline with Infynity, is “a holistic solution for Finsure’s brokers”.

Keen to take advantage of what open banking and NextGen.Net’s acquisition of Frollo might mean for their business, Bednar is excited about brokers being able to access borrower’s data directly from banks to inform an application.

“That’s exactly what I’m looking for, to have as little third-party integration and interaction as possible. It was great to see that NextGen.Net had that breadth of knowledge outside of submissions,” he says.

Bednar relies on NextGen.Net’s ApplyOnline platform to cover off on ‘efficiencies and accuracy’.

“That’s a huge piece of work in itself,” he exclaims, adding “we keep our platform open to allow brokers to be a little bit more fluid in how they collect the data; and the idea of them sending it to NextGen.Net is great for me because they effectively become the quality insurer and checker that allows our system to be efficient and accurate – so when it goes to the lender the data is complete.

Fintechs are ransomware targets. Here are 9 ways to prevent it.

indiefoxx was just banned from Twitch again, but why?

Why did Twitch ban the word “obese” from its predictions?