GRID Legends on Quest feels like a wasted opportunity. Originally released as a flatscreen title on PC and consoles last year, this Quest port is structurally the same game in VR, but with some serious issues and heavily downgraded visuals. On the one hand, we finally have a console-style sim racer for mobile VR, almost a year after the flatscreen version launched. Porting the whole game over to Quest is no small feat, but it’s also immediately apparent that Legends required heavy compromises to run on Quest 2, as well as a whopping 31GB of storage space to install.

Let’s start with the obvious. Visually, GRID Legends looks bad and runs at a resolution of 1,080 by 1,188 pixels – close to half of Quest 2’s per eye resolution. I believe that graphics aren’t everything; not everything on mobile hardware can look like Red Matter 2. We’ve seen games take big visual hits before to run on Quest, like Medal of Honor: Above and Beyond, and Legends is a testament to Codemasters’ versatility. That said, it’s hard to feel immersed when the graphics look this rough. As you can see in the screenshot below, textures are super low resolution and jaggy edges are everywhere. 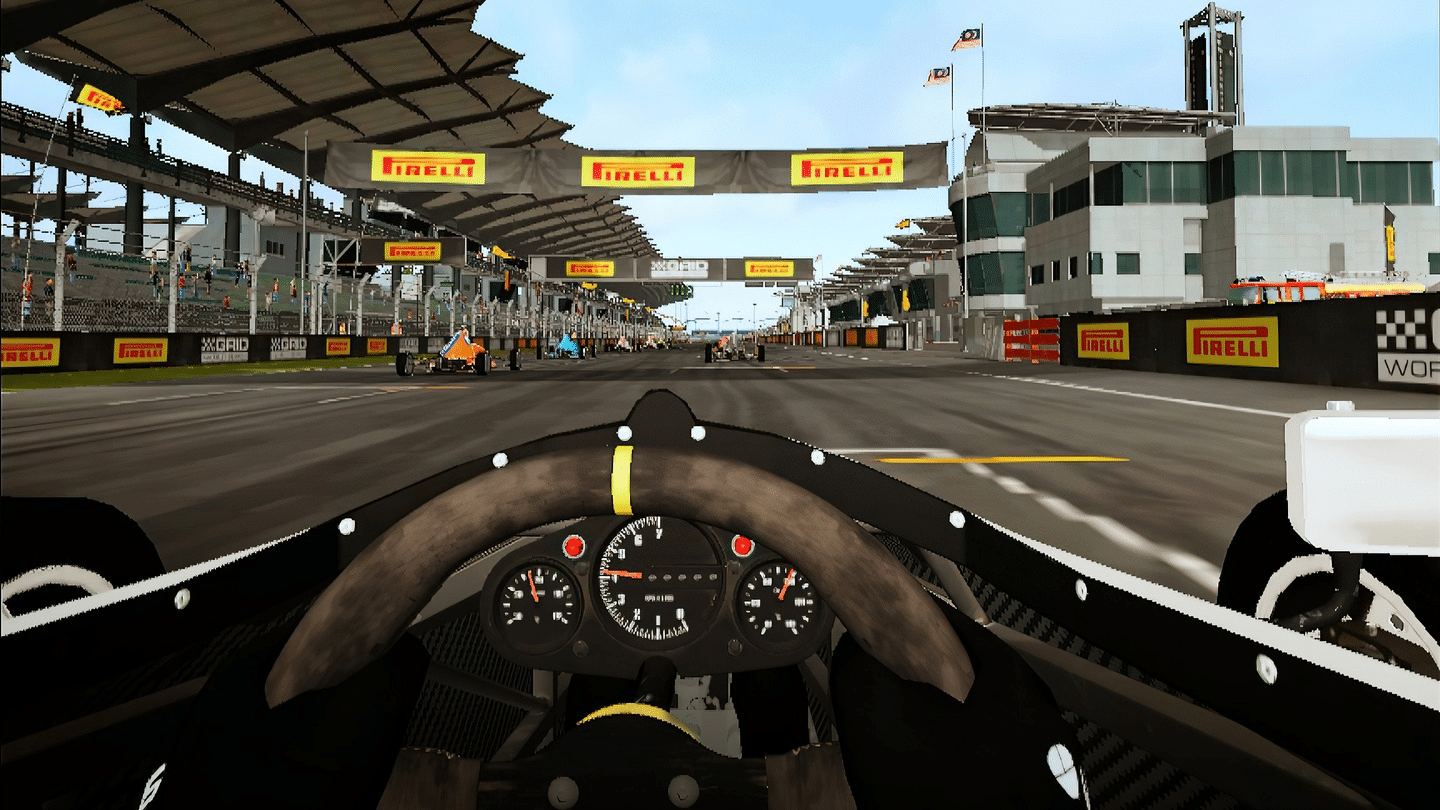 I don’t believe these trade-offs to get the game running on Quest were worth it, and that’s because Legends barely utilizes VR’s unique capabilities. Cars don’t have functional mirrors, requiring you to physically turn around to see who’s behind you, which is impractical during races. Plus, the game forgoes motion controls – instead of gripping the steering wheel, you’ll turn the car with the Touch Controller’s analog stick.

In fairness, VR racing sims often use traditional gamepads. Directly grabbing a virtual steering wheel with motion controls like in L.A. Noire: The VR Case Files won’t suit everyone. It’s more understandable with PC VR games like F1 22 and Dirt Rally 2.0, where you can plug in a racing wheel accessory to compensate. However, VR support is more of a nice bonus for those games, and unlike GRID Legends, they aren’t limited to a VR-specific platform. Even if it’s not what you want from a Quest game, the control scheme works and drifting around corners feels tight. Mapping acceleration and brakes to the triggers feels natural, and pulling off tricky overtakes is still satisfying.

I spent most of my time playing the Formula 1: Drive to Survive-inspired story mode, Driven to Glory. Playing the unnamed Driver 22, you’ll join Seneca Racing as the Grid World Series’ hottest new rookie, breaking up the action with live-action cutscenes. You don’t need to win every race. Instead, you’re tasked with setting goals like beating a specific opponent. An underdog sporting story isn’t wildly original, but the motor racing fan within me enjoyed this, even if the acting’s a mixed bag.

GRID Legends doesn’t include any comfort settings for VR players. That being said, most of the action takes place seated inside a  a car with a cockpit view, which should act as a natural and immersive form of vignetting during movement. This should hopefully reduce motion sickness for those who are sensitive. Unlike the flatscreen edition, there’s no third person option while driving and menus are all 2D screens, so there’s no reason to play this standing. 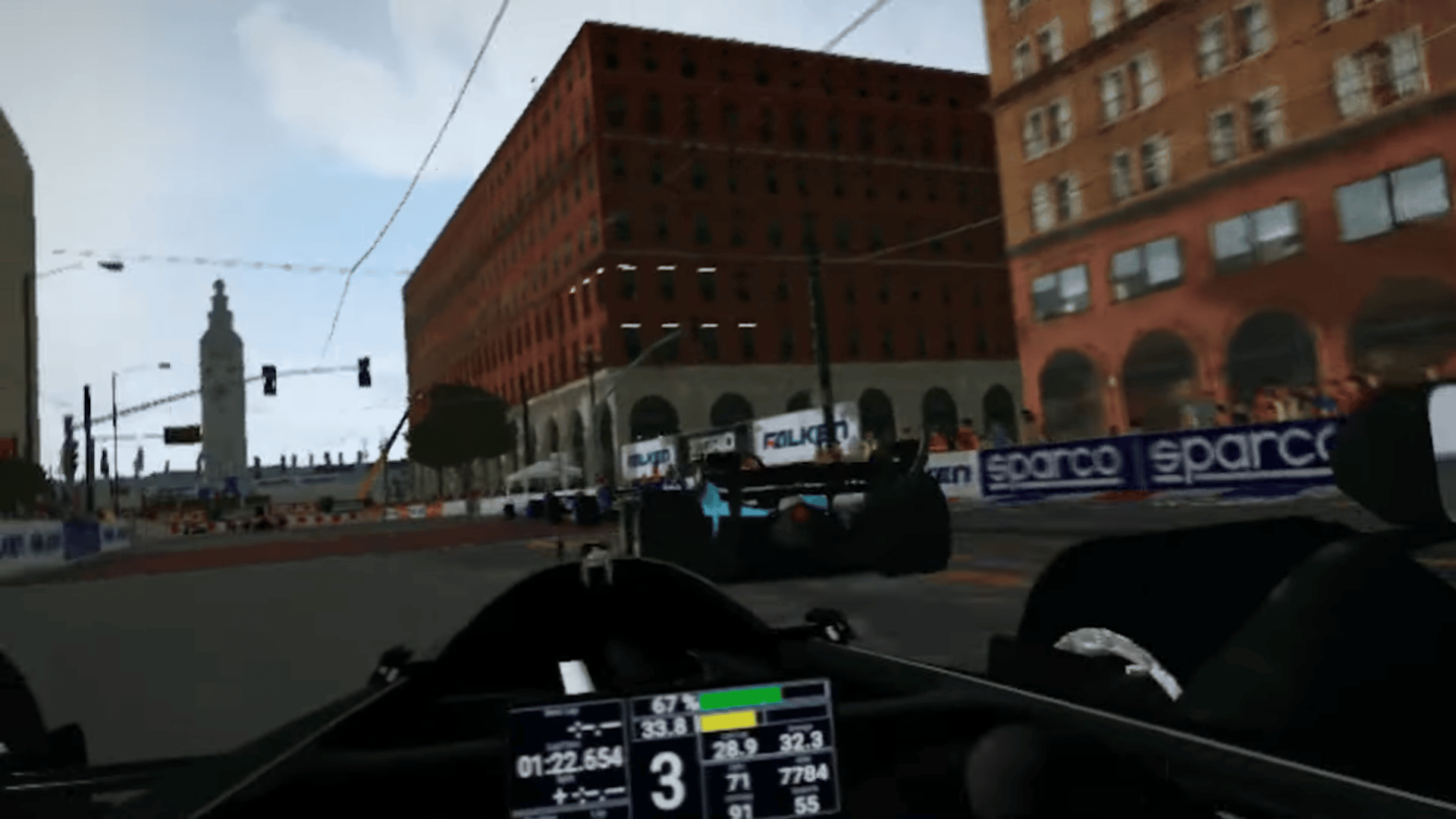 There are some minor changes to the broader game compared to the original flatscreen release. Online multiplayer races are limited to 16 players instead of 22, there’s no DLC packs, and, unsurprisingly, no crossplay support. Otherwise, this is the same game that released last year. That comes with all the familiar events, like time trials, standard racing across three laps, and an elimination mode that removes the slowest drivers. You still have over 100 customizable vehicles and 130+ race tracks, alongside the standard career mode.

GRID Legends is a good racing game but a bad VR game, and ultimately, it’ll come down to what you’re looking for. Do you want a racing sim that properly utilizes VR’s unique capabilities? Or do you want a portable VR racing game, regardless of the compromises involved? If you fall into the latter group, you may enjoy this adaptation even with the watered-down visuals. You’re still getting the whole experience packed with entertaining and thrilling racing.

If you’re like me and want something more, Legends is disappointing. While it’s commendable that Codemasters managed to get the game running on mobile hardware, making this a Quest exclusive instead of an optional VR mode on other platforms adds an expectation that simply hasn’t been met. Even though the racing remains enjoyable, you could play this anywhere else and have a better time. The wider compromises on Quest aren’t worth it.

Clean Energy To Communities Program Launched By Department Of Energy

USD/CAD pares Wednesday’s losses and climbed back above 1.3300 on a buoyant US Dollar