The completion marks a key milestone before its launch, which is planned to take place early next year.

ViaSat-3 has been transported to Boeing Satellite Systems facility in El Segundo, California, US. It is one of three satellites that comprise the ViaSat-3 global constellation in geostationary orbit.

The first Ka-band communications satellite will provide high-speed internet access to the Americas and the regions of the neighbouring oceans.

The second and third satellites are ViaSat-3 (EMEA) and ViaSat-3 (APAC).

Viasat space and commercial networks president Dave Ryan said: “This is an incredibly exciting time for Viasat as the first of the three high-powered ViaSat-3 satellites in our global constellation enters the final stages of production.

“Once complete, we will be ready to put the world’s highest-capacity single satellite into geostationary orbit to serve the world by delivering broadband to the hardest-to-reach areas anywhere — on the ground, in the air and at sea.”

Each of the satellite is designed to generate payload power exceeding 20kW.

Following the payload integration with Boeing’s 702 platform-based bus module, the first satellite will be put through environmental testing.

Ryan added, “While the payload was assembled at Viasat’s Tempe, AZ facility, the effort was company-wide.

“From Tempe, to the antenna expertise in Duluth (GA), to Germantown (MD) for their software and systems engineering know-how and other offices around the world from Chennai, India, to Lausanne, Switzerland, as well as at our Carlsbad headquarters, all of these teams worked together to come up with a totally unique way to not only build this spacecraft but to test it in record time.”

BAE Systems’ Factory of the Future is driving digital connectivity

WASHINGTON — Dust accumulation on the solar panels of NASA’s InSight Mars lander is reducing the power to the spacecraft and could force the mission to end within a year.

At a June 21 meeting of NASA’s Mars Exploration Program Analysis Group, Bruce Banerdt, principal investigator for the InSight mission at NASA’s Jet Propulsion Laboratory, said dust accumulating on the lander’s two solar panels has drastically reduced the amount of power they produce, requiring some instruments to be turned off at least temporarily.

“The dust accumulation on the solar arrays has been considerable. We have about 80% obscuration of the arrays,” he said. The amount of energy available to the lander per Martian day, or sol, has dropped from nearly 5,000 watt-hours shortly after its November 2018 landing to less than 700 watt-hours now, according to data Banerdt presented at the meeting.

The decline in energy was expected, and the mission was designed to have enough power for its prime mission, which lasted one Martian year or 687 days. The continued decline in power, though, is becoming an issue as InSight operates in an extended mission funded through the end of 2022 to collect additional seismic data.

Banerdt said the mission had hoped for “cleaning events” where winds remove some of the dust, allowing the panels to generate more power. Such cleaning events allowed the solar-powered Mars Exploration Rovers, Spirit and Opportunity, to operate for years, far longer than expected.

Those cleaning events have not taken place for InSight, though, and other attempts to remove the dust, such as shaking the panels, have failed. More recently, the mission tried a novel approach for cleaning the panels: using the lander’s robotic arm to scoop up regolith and then release it near the panels. Winds allowed some particles to bounce off the panels, in the process removing dust, a process known as saltation.

“We had some success with that,” he said. The first attempt at saltation increased energy output by 25 to 30 watt-hours, he said. A second attempt, though, provided only a temporary increase in energy, and a third attempt last weekend offered “a little bit of an increase.”

“This has bought us a little bit of headroom that we didn’t have before,” he said. Energy levels are dropping because of both the increased dust accumulation as well as Mars nearing aphelion, or the farthest point in its orbit from the sun. Mars will reach aphelion in about two months, after which sunlight, and thus power levels, should increase slightly.

Banerdt said the mission is closely monitoring power levels to determine what systems may need to be turned off as aphelion approaches. “It’s going to be extremely challenging to operate through that, especially with the instruments,” he said.

Some sensors, such as for collecting weather and magnetic field data, have already been turned off, or used only sporadically. “We hope to get some of these instruments up to at least do periodic measurements after aphelion,” he said.

InSight’s main instrument, a seismometer, has remained in operation. Banerdt, though, did not rule out having to turn it off near aphelion. “We may have to power off the entire payload for some period around aphelion,” he said. “There may be a month or two of time where we might have to turn off the seismometer, but we’re trying to tighten our belts and sharpen our pencils to see whether we can operate straight through.”

InSight will get a respite after aphelion as sunlight levels increase, but Banerdt warned it will be temporary. By April 2022, energy levels will decrease further, which he said was due to increased dust accumulation on the panels, more dust in the atmosphere and changes in orbital geometry. In a chart he showed, those power levels fell to the “survival energy” line below which the lander cannot operate.

“Unless we get a fairly significant increase in our solar array output, we’re likely to end our mission sometime around that time next year,” he said.

Subcon is the UK’s premier subcontract manufacturing supply chain show. For over 40 years, the show has continued to deliver high quality content and a variety of UK and international exhibitors.

This year, Subcon will be co-located with The Engineer Expo and new for 2021, the very popular Manufacturing Management Show. Join the manufacturing community from the 14-16 September at the NEC, as we reunite in person for the first time in two years.

The Manufacturing Management Show, will bring together a detailed conference agenda delivering sessions led by leading, big-name companies. The conference will allow attendees to gain expert insight and content from their manufacturing peers. 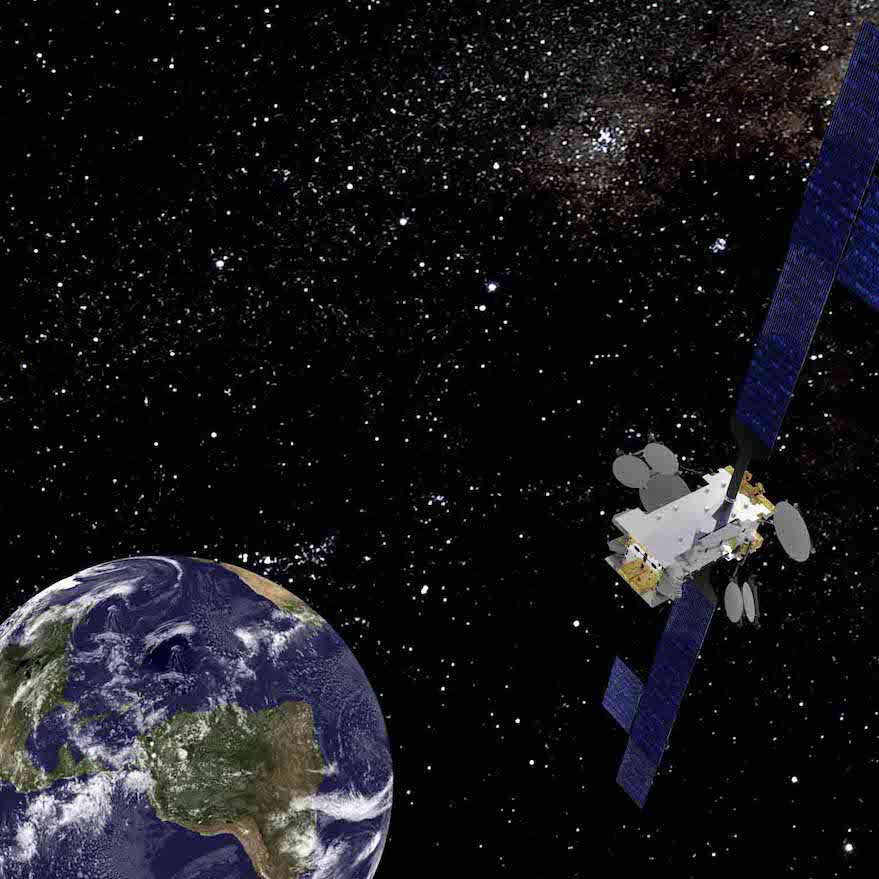 WASHINGTON — The Export-Import Bank of the United States has arranged financing for the SpaceX launch of a Hispasat satellite, the first space deal the bank has done in six years.

Ex-Im announced June 21 that it approved $80.7 million in financing for a Falcon 9 launch of a Hispasat satellite, Amazonas Nexus, as well as launch and initial in-orbit insurance. The bank said the financing will be in the form of either a direct loan or a loan guarantee.

The Spanish operator announced in early 2020 it ordered Amazonas Nexus from Thales Alenia Space. The 4,500-kilogram satellite will replace Amazonas-2 at 61 degrees west in geostationary orbit. At the time of the contract announcement, Hispasat said it expected to launch the satellite in the second half of 2022. Bpifrance, France’s export credit agency, is financing the construction of the satellite.

The deal was notable because it was the first space industry deal financed by Ex-Im since 2015. The export credit agency was sidelined for several years by a lapse in its authorization and then a lack of a quorum on its board, which prevented it from approving deals larger than $10 million.

The Senate restored that quorum by confirming three nominees for the board in May 2019. An omnibus spending bill signed into law in December 2019 authorized the bank for seven years, the longest reauthorization in the bank’s history.

“This transaction signals the return of Ex-Im in support of the U.S. satellite-related industry,” said James Cruse, acting first vice president and chairman of the bank, in a statement. “The need for export credit agency support is well-established in this industry, and the availability of Ex-Im’s financing enables SpaceX and other U.S. exporters to remain competitive.”

The industry, though, has changed significantly since 2015. Up until that time, Ex-Im primarily financed GEO satellite and launch deals, supporting satellite manufacturers such as Boeing, Lockheed Martin and Orbital Sciences, as well as SpaceX launches, with a total value of about $5 billion. However, demand for GEO satellites dropped precipitously in the latter half of the decade, and has only modestly recovered, as industry interest shifts to low Earth orbit megaconstellations.

That did not stop Ex-Im officials from promoting their role, even if they overplayed it. “During the present contraction in financial markets, Ex-Im continues to carry out its mission by providing financing when private lenders lack the capacity to do so,” Spencer Bachus, a member of the bank’s board, said in the statement. “In addition, one very positive outcome of the action we took today will be the preservation of approximately 500 U.S.-based jobs.”

It is unlikely jobs at SpaceX were in jeopardy had this deal not closed. Commercial GEO satellite launches represent a small fraction of SpaceX’s overall launch activity, which is dominated by its own Starlink constellation as well as U.S. government business.

Ex-Im officials said last November they were evaluating nearly $2 billion in applications for financing in the space industry, acknowledging that the market had changed since 2015. They said they were looking at deals beyond traditional GEO satellite manufacturing and launch contracts, but said any new technologies had to be proven and demonstrate a “commercial viability” to ensure repayment of the financing the bank underwrites.

The tunnel will have three different test sections, large, small and open. The test specimens will be positioned in these sections and will be equipped with state of the art technology measurement and sensing devices for advanced testing.

With the integrated moving ground belt system, landing and take-off tests for aircraft will be carried out only in this tunnel in Turkey. In addition to these test capabilities, the production, integration and instrumentation of the models to be tested will also be carried out in this facility and significant contributions will be made to the product development process.

Turkish Aerospace president and CEO, Prof Temel Kotil said: “We are building the second largest subsonic wind tunnel facility in Europe. We keep working in order to achieve our biggest project Turkish Fighter. Our facility will be the only facility in Turkey in this field with the capability to allow aero-acoustic testing.”

Why is 25th June critical for Ethereum?

All Characters, Skills, and Abilities in Naraka: Bladepoint

U.K’s crypto-users are growing in number, but do they even understand the asset class?