Avanti Bank has recently become the second cryptocurrency company to get a banking license in the United States. The Wyoming State Banking Board recently voted for granting Avanti Bank and Trust, a bank charter, which allows Avanti to have the same powers as national banks in the country.

With this approval, Avanti has become the second crypto firm to receive a banking license, after Kraken crypto exchange was also authorized by the Wyoming State Banking Board last month.

According to Avanti, the bank aims to provide services including a tokenized US dollar, called “Avit,” as well as custody services for digital assets. Avit will be issued on liquid, a Bitcoin sidechain developed by Blockstream and on Ethereum, for programmable smart contracts. Avit would be the first bank to issue a digital asset on Liquid. The Liquid network allows Bitcoins to be moved around more quickly than on the Bitcoin blockchain.

Avanti previously confirmed a partnership with Blockstream, stating that the firm is the bank’s technology partner. Avanti’s Avit is one of the several bank-led innovations in the cryptocurrency space. Goldman Sachs has also considered issuing its own digital asset.

The firm also aims to provide commercial accounts in early 2021. In an official press release, Caitlin Long, the founder and CEO of Avanti said:

“We will provide products and services that do not exist in the market today. Currently the only type of U.S. financial institution that can provide final and simultaneous settlement of trades between digital assets and the U.S. dollar—because it is the only type currently approved to handle both within the same legal entity—is a Wyoming special purpose depository institution like Avanti. Wyoming has the only U.S. regulator with a bank supervisory and regulatory program for digital assets that is near completion.”

With the news of the recent institutional adoption in the cryptocurrency space, Bitcoin and other cryptocurrencies have also seen an uptick of bullish momentum. Since Avanti’s announcement, Bitcoin’s price remains above the $13,000 mark, currently trading at $13,234. However, Bitcoin seems to have been trading sideways above this level, while other large cap altcoins have not seen any uptrend in the past few hours.

3 Reasons Behind Bitcoin and the Crypto Market’s Sudden Crash

Bitcoin whales have been shorting the market.

On Nov 21, crypto analyst Willy Woo indicated that “old hands have been selling into this rally since the start of November.” Old hands selling is a bad sign that may mean that a price drop may be coming soon.

On Nov 22, Crypto Quant CEO Ki Young Ju indicated that “When whales are active (over 90%) on Coinbase, the $BTC price will likely be going sideways or bearish.” Typically, whales can acquire Bitcoin at a much lower price. They simply cash out to guarantee enough profit when the market becomes overheated.

The 2017 Bitcoin surge followed by its crash may be related to Bitcoin whale manipulations.  According to University of Texas professor John Griffin and Ohio State University’s Amin Shams, the Bitcoin bull run in 2017 may be driven by Bitfinex. They said through an academic paper:

“This one large player or entity either exhibited clairvoyant market timing or exerted an extremely large price impact on Bitcoin that is not observed in aggregate flows from other smaller traders.”

Although there are more and more investors interested in Bitcoin (BTC) and other cryptos, the current price action of BTC seems to be primarily driven by institutional and big players. This year, Grayscale and its Bitcoin trust have been really eye-catching, as it has secured the largest Bitcoin amount seen by any institutional investor up to now. MicroStrategy and Square’s big Bitcoin buy-ins are also influential pulses that have driven Bitcoin’s price up as well.

“Economic history is a never-ending series of episodes based on falsehoods and lies, not truths. It represents the path to big money. The object is to recognize the trend whose premise is false, ride that trend, and step off before it is discredited.”

There may be a series of crypto regulations upcoming in the US. Coinbase CEO Brian Armstrong has allegedly heard rumors that the Trump Administration may soon issue a huge and strict crypto wallet regulation on United States traders with privacy-invading data collection requirements.

On Oct 8, the U.S. Department of Justice published a “Cryptocurrency Enforcement Framework” that put cryptocurrency under strict regulations, similar to policies revolving around fiat money.

On Nov 25, CNBC’s Brian Kelly warned of a Bitcoin short-term correction that could see its price plummet to $12,000.

An explanation may be that altcoins rose much more than Bitcoin in price, which could serve to attract more funds into altcoin speculations. Whenever Bitcoin crashes, altcoins get pulled down as well.

Another reason is that searches for “buy bitcoin” on Google Trends have exploded to new highs, which means rising demand from retail investors. But this may not be a good sign. As Kelly said:

“Whenever you get that big of an address growth implied, that is a caution sign.”

The research lab, the Christian Doppler Laboratory (CDL-BOT), will provide “cutting-edge research on DLT interoperability, the intersection of DLT with the Internet of Things and developer support offerings.”

The Federal Minister for Digital Economic Affairs in Austria has officially opened the laboratory in a digital ceremony, joined by the co-founder and co-chair of the IOTA Board of Directors, Dominik Schiener. The IOTA Foundation continues to strive for developing open source technologies and infrastructure for trusted IoT.

For the IOTA Foundation, this project would allow more development and research on the IOTA Tangle as well as applications in the Internet of Things. The project would also look beyond the IOTA protocol to further develop the European DLT ecosystem. In an official press release shared with Blockchain.News, IOTA explained:

Pantos, a scientific research project aiming to solve the key technical barriers in the crypto and digital asset space, as well as Bitpanda, a leading European neobroker has also joined the research project. Prof. Stefan Schulte, the lead for the new lab said:

“With the rising number of potential application areas for DLT-based payments and data exchange in the Internet of Things, new DLTs have to be integrated, and interoperability between different DLTs becomes necessary. I am looking forward to doing joint research with the IOTA Foundation and Pantos in order to find novel solutions to this highly topical topic.”

The press release also mentioned that postdoctoral and doctoral students would also be employed for the research project, under the supervision of Prof.Stefan Schulte.

Greenheart PUNT, the new sustainable Defi token led by Greenheart, is delighted to announce that the PUNT token has been approved for listing on the leading Singapore digital exchange DigiFinex.

DigiFinex is a Top 12 global crypto exchange and regularly trades in excess of $2 Billion dollars per day in volume and liquidity. The exchange trades approximately 200 leading coins and has over 4 million customer accounts – of which 800,000 are active daily users.

The listing on DigiFinex is in addition to Greenheart PUNT’s initial (December 1st) listing on the LAToken exchange and is designed to maximize liquidity and trading volume for PUNT token holders and investors.

The Greenheart PUNT token is scheduled to begin trading on DigiFinex on Wednesday 2nd December 2020.

Greenheart was founded two years ago in Ashbourne, County Meath, and was formed two years ago by childhood friends Mark Canavan and Paul Walsh. The company produces a full range of sustainable oils – and shortly – edibles and balms for the retail market. Although Greenheart only began selling its oils in January 2020, it already has over 1,500 customers, a customer return rate three times the industry average and over seventy trusted 5-star reviews on its website.

Before launching Greenheart, Paul and Mark spent years researching extraction methods to produce the most effective agricultural products, for the end consumer with full traceability from seed to shelf. The company is the first sustainable producer in its market to use the full scope of cutting edge technology in its cultivation and production. This includes Big Data, Artificial Intelligence (AI), Machine Learning, and Blockchain technology at each stage of the planting, harvesting, production, and retailing process.

The Greenheart Punt token is being backed by a real commodity – 1,000 liters of Greenheart’s oil in year 1 (with a retail value of $4 million US dollars) – allowing token holders to redeem their tokens directly for Greenheart oil.

The company also plans to continue deploying pioneering sustainability technology and cold press extraction, while also launching an Innovation Centre to teach farmers and the wilder public about the benefits of growing hemp and sustainable crops in Ireland.

Ripple’s XRP token has been all the rage lately, making headlines left and right due to its relentless surge in the past week. Currently, its price has pulled back slightly, but the bull run and the talks revolving around XRP have benefited Ripple overall.

At the time of writing, Ripple’s XRP price has pulled back, down 30% on CoinMarketCap in the last 24 hours. However, blockchain analytics provider Santiment has asserted that XRP has excelled in one key area. Social discussions revolving around Ripple has escalated, especially lately.

For the first time since April, Ripple may have pinned investors’ interest more than Ethereum (ETH), according to behavior analysis charts. Ripple has been talked about and discussed more than Ethereum lately, and this may be significant since it may indicate that market sentiment around XRP is growing stronger, potentially surpassing Ether (ETH) as a preferred digital asset investment. Per the announcement:

“The daily social volume (mentions on #crypto platforms) of $XRP is on the verge of surpassing $ETH for the first time in 7 months. This crossover would be significant, as it signals change in interest level between the two assets, regardless of positivity.” 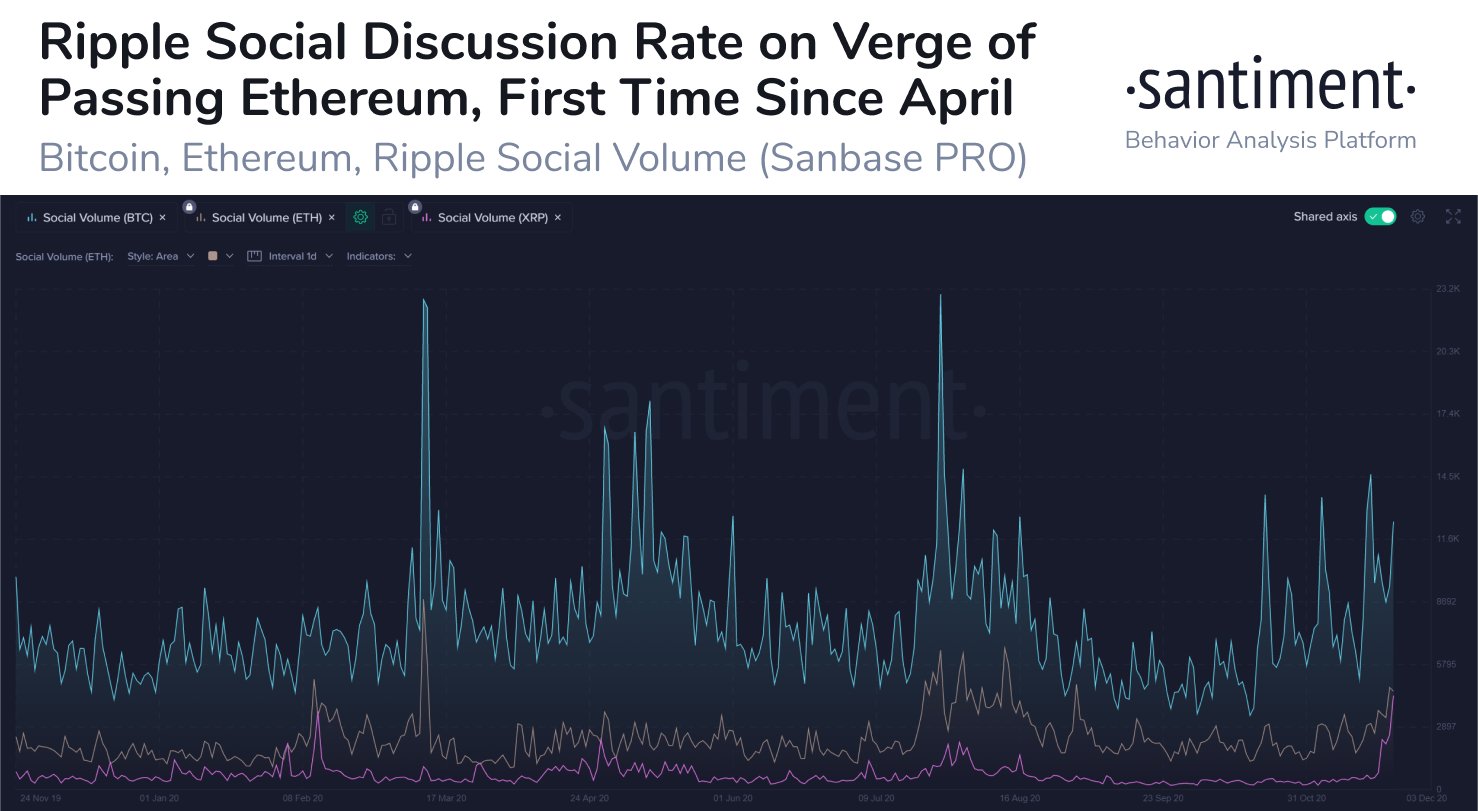 According to the chart illustrated above, which displays Bitcoin, Ethereum, and Ripple by social volume, or popularity, Ripple has captured increased investor interest and this digital asset may soon be mentioned more than Ethereum. The purple line is an indicator of Ripple’s social volume, with the orange one and blue one representing Ethereum and Bitcoin respectively.

The development of XRP Ledger, the underlying distributed ledger technology backing XRP, has increased in activity by five-fold, compared to 18 months ago.

Ripple’s social volume, as well as the technology company’s new projects, have coincided with the XRP token’s rise in price. According to CoinMarketCap, XRP gained by nearly 140% in a month. Its rise in price has been said to be influenced by many factors, per market experts.

In just a week’s time, Ripple’s XRP token outperformed both Bitcoin and Ethereum on the market, as it regained its position as the third-largest cryptocurrency by market cap, after previously having been unseated by Tether (USDT).

A stellar performance by XLM

XRP is not the only altcoin that has been outperforming lately. Recently, Stellar Lumens (XLM) recorded gains of over 155% in a week, as it went through a protocol update. This was implemented by validators on the network and will provide a more seamless experience for users on the Stellar network.

Stellar Lumens is a modified fork of Ripple. It was also initiated by one of Ripple’s co-founders, Jed McCaleb. Similar to Ripple, Stellar also operates as a payment technology designed to connect financial institutions and improve cross-border payments through lower costs and improved time efficiency.

Ethereum has something up its sleeve too

With Bitcoin’s recent bull run driving altcoins higher, who is to say whether or not Ripple may surpass Ethereum in terms of investment popularity in the long run. Currently, Ethereum awaits the launch of ETH 2.0 mainnet, which is less than a week away. With the new blockchain segment implemented on December 1, its native cryptocurrency Ether may increase in value.

Level Sensors Market worth $6.1 billion by 2025 – Exclusive Report by MarketsandMarkets™

Technological Innovations at the Tokyo Olympics

The Basics: Popular Casino Games You Should Play

How to activate crossplay on Rainbow Six Siege