Australia is home to 733 active fintech companies, up from 629 in September 2019, reveals KPMG’s Fintech Landscape 2020 map. This represents an increase of 104 companies that joined the sector between September 2019 and December 2020.

The infographic, released on December 21, 2020, provides a snapshot of the Australian fintech ecosystem, revealing several major trends that have emerged over the past year.

In particular, the blockchain and cryptocurrency segment saw the strongest growth with 49 new companies being established. It’s followed by lending with the addition to 26 companies (some reclassified from the payments category since KPMG’s Fintech Landscape 2019 edition), and insurtech with 24 new companies established.

In 2020, payment maintained its dominance in the Australian fintech industry with 151 companies, up from 143 in 2019. Capital markets saw the addition to ten companies, bringing the total to 53, and neobanking, while remaining small, added five new companies for a total to 10.

Fintech segments that lost players in 2020 include regtech, wealthtech, data and analytics, and crowdfunding. 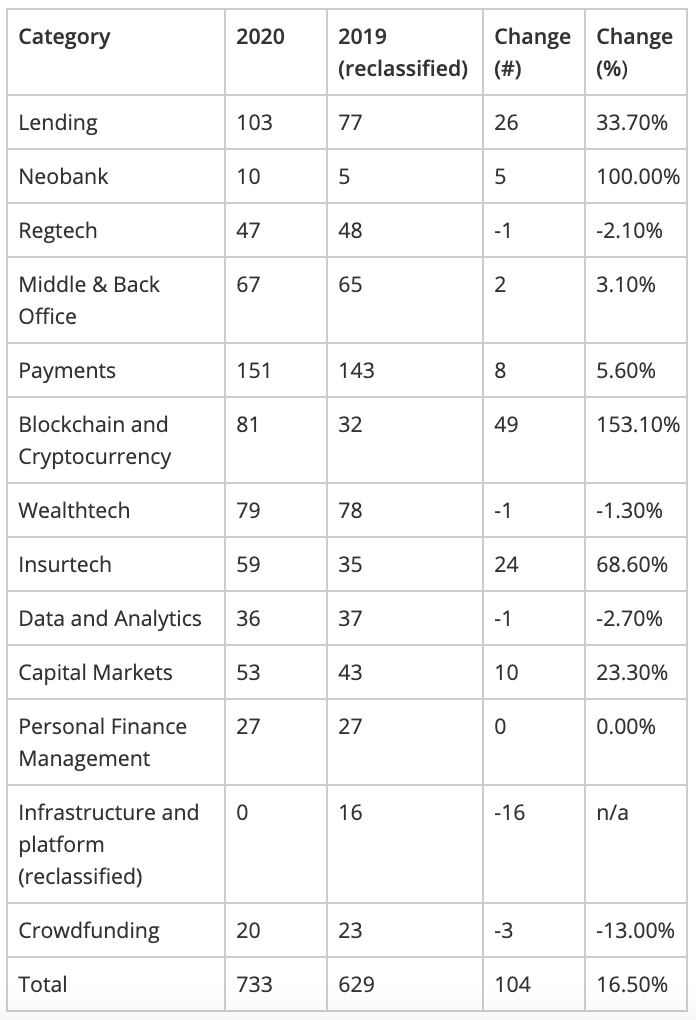 Daniel Teper, national fintech lead at KPMG Australia, said in a statement that the Australian fintech industry continued to evolve in 2020 with several companies going through repurposing and recategorization as they changed monetization strategies and business models.

Some categories also saw rationalization and consolidation, a trend that’s expected to continue as the market matures and category winners and losers begin to emerge, he added.

The maturing of Australia’s fintech industry is also evidenced by the rising number of post revenue fintechs. The 2020 EY Fintech Australia Census, released in October 2020, found that out of more than 100 local fintech companies surveyed, 78% were post revenue and 98% had been in operation for two or more years.

The study also found that Australian fintech startups continued to see strong growth in paying customers, with 39% of local fintechs surveyed now having more than 500 paying customers, up from just 27% in 2019.

Judo Bank, which provides banking services to small and medium-sized enterprises (SMEs), closed a A$284 million Series D funding round in December 2020 that valued it at about A$1.6 billion. Airwallex, which is originally from Australian but which has since moved its headquartered to Hong Kong, raised a total of A$307 million in its Series D funding round last year.

One major investment trend outlined in KPMG’s annual Pulse of Fintech report is investors’ rising interest in the ‘buy now, and pay later’ (BNPL) or instalment finance sector. This comes at a time when the COVID-19 pandemic is forcing merchants to ramp up their digital capabilities and enhance e-commerce options.

The trend has been evidenced, for example, by China’s bigtech Tencent buying shares in Afterpay, Australia’s leading BNPL firm, as well as the acquisition of US-based BNPL player QuadPay by Australia’s fintech firm Zip.

The growth of the Australian fintech sector over the past year came on the back of policy enhancements and government support. The Federal Budget announcements in early October 2020 unveiled the Digital Business Plan, which includes investment in a Digital ID system, Consumer Data Right (CDR) enhancements, support for fintechs to export financial services, and funding of regtech pilot projects that use blockchain to reduce compliance costs.

Another key development last year was the launch of the first phase of open banking. Open banking is expected to be fully implemented by 2022. 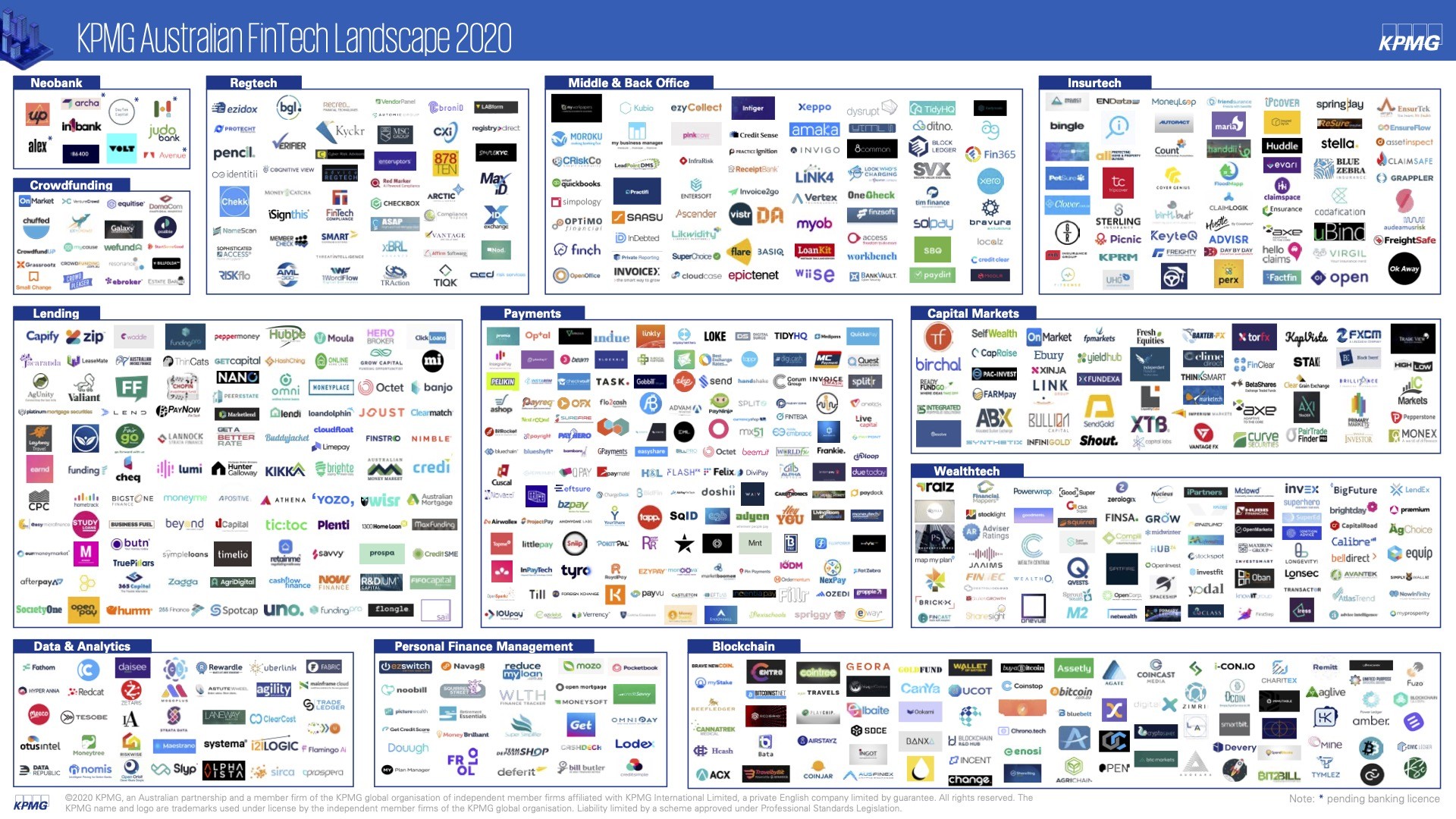 The post Australia Saw Over 100 New Fintechs in 2020 as The Sector Matures appeared first on Fintech Singapore.

Lakeba’s eziTech Banking as a Service technologies are now being utilised by a growing consortium of organisations in the financial services sector, including some of Australia’s most progressive neobanks.

Quixxi Security’s patented obfuscation technology is used by one of the biggest US insurers, Allstate Insurance Company; Africa’s Standard Bank Group and some of Australia’s most recognised brands. Increased adoption of 5G and eventual 6G technologies in financial services accelerate the need for Quixxi’s technology.

“We were quite happy to be the biggest fintech you’ve never heard of. But this two-year consecutive ranking by the Financial Times and Nikkei Asia puts pay to that”, smiles Porcelli.

“It’s really important to us to keep attracting the right talent and challenging the ridiculous notion that fintech shareholders need extreme patience in seeing their returns. Our continuing rate of achievement blows that notion out of the water,” concludes Porcelli.

The platform has recorded increased funds under administration (FUA) of $37.9 billion as it expands its presence in the UK with the opening of an office in Edinburgh, Scotland.

For the March quarter, Praemium recorded an 11% increase in FUA, and a 96% increase compared to March 2020.

The Australian platform FUA increased 224% on the previous corresponding period to $16.9 billion while the international platform increased 42% to $4.4 billion.

The platform recorded $801 million in net platform inflows with $448 in the Australian platform for the quarter, up 149% on the previous corresponding period.

“Praemium has doubled in size over the past year. Despite the pandemic, the past 12 months have been the most transformational in our story thus far,” Praemium chief executive Michael Ohanessian said.

The results follow the opening of a Praemium office in Edinburgh.

To read more, please click on the link below…

A study of 2,000 global consumers released by Mambu, the market-leading banking and financial services platform, revealed that a significant misunderstanding of open banking is hampering its adoption. The Censuswide survey, commissioned by Mambu, found that more than half (52%) of respondents have never heard of open banking and 61% have never used it, in spite of 80% of respondents using one or more mobile finance apps.

“The research reveals the majority of customers don’t understand what open banking is, how it works and what it means for them”, said Elliott Limb, Mambu’s Chief Customer Officer. “But it also reveals they do care about receiving better financial services that support their lifestyles – smart banking. If banks address this need and lack of understanding, it will help banks build customer loyalty and provide genuinely innovative, differentiating, revenue-generating services.”

Kristofer Rogers, General Manager ANZ for Mambu, added, “In Australia, one of the main reasons for the slow adoption of open banking so far is that open banking is built on modern technology, and the Australian banking and financial services industry is not. There’s a huge disconnect, with many established banks simply unable to deliver on the regulatory requirements of open banking with their existing technology – they need to adopt API-first, cloud banking tech to truly embrace open banking. And it’s imperative that we do make progress on this because beyond technology, open banking is ultimately an ideology of creating better financial outcomes for every Australian, and who doesn’t want that.”

Open banking has witnessed an increase in adoption globally as a result of the COVID-19 pandemic, and the research indicates a marked change in attitude and priorities as a result of the crisis. According to our survey, 52% said they wanted more control over their finances. At the same time, 40% said the pandemic had changed their attitudes to privacy and 24% to data sharing. Another boost came from the 41% who said they have had more time for research.

However, existing concerns remain with 48% of consumers claiming they are ‘scared’ to use open banking and 53% still believing that open banking is a dangerous use of data sharing.

“Banks must accept that open banking is still a not fully comprehended phenomenon so this is the starting point,” said Dmitrii Barbasura, CEO and Co-Founder, Salt Edge, a Mambu partner. “We believe they need to invest time and effort in educating customers about the new possibilities they get access to, and also inform them about their rights and the high safety level covered by open banking.”

Demonstrating the opportunity for open banking, the survey revealed that 57% said they would be more likely to use it if their bank had more successfully implemented and promoted it.

When exploring further what consumers want from open banking, the survey shows that nearly half of respondents want instant digital money transfers; more than a third want aggregated bank balances at a glance; a third want tips on better money management and a quarter want money-saving suggestions for their bills.

This is the first study of Mambu’s newly launched research series, Disruption Diaries. The series seeks to understand what customers think of the key trends driving the development of the financial services industry, in an effort to identify opportunities for banks and others. The full report on open banking can be found here: Let’s talk openly.

Zip Co (ASX: Z1P) has priced $400 million of senior convertible notes to fund expansion into new regions on the back of major growth in the US.

Co-founder and COO Peter Gray says the move will keep shareholders happy, with the notes set to mature in 2028.

“We are very pleased with the strong global demand for this offering,” says Gray.

“This transaction further diversifies Zip’s sources of capital and allows us to pursue our global growth aspirations while reducing potential dilution of existing shareholders. Another fantastic outcome for Zip and its shareholders.”

However, Zip’s latest raise doesn’t come close to the whopping $1.5 billion secured by Afterpay’s settlement of convertible notes due in 2026.

The offering is being marketed to eligible investors and the notes are set to be listed on the official list of the Singapore Securities Trading exchange. Settlement is expected on or about 23 April 2021.

To read more, please click on the link below…

LoL: MAD Lions Are The New Kings Of Europe, Is The Reign Of G2 Esports And Fnatic Finally Over?