Palestinians demonstrate against Israel’s annexation plans in Rafah, Gaza, on June 11. Palestinian leaders have begun refusing to coordinate with Israel on matters of daily Palestinian life, from tax collection to policing to medical treatments — a move some Palestinians see as self-defeating. Anadolu Agency/Anadolu Agency via Getty Images hide caption 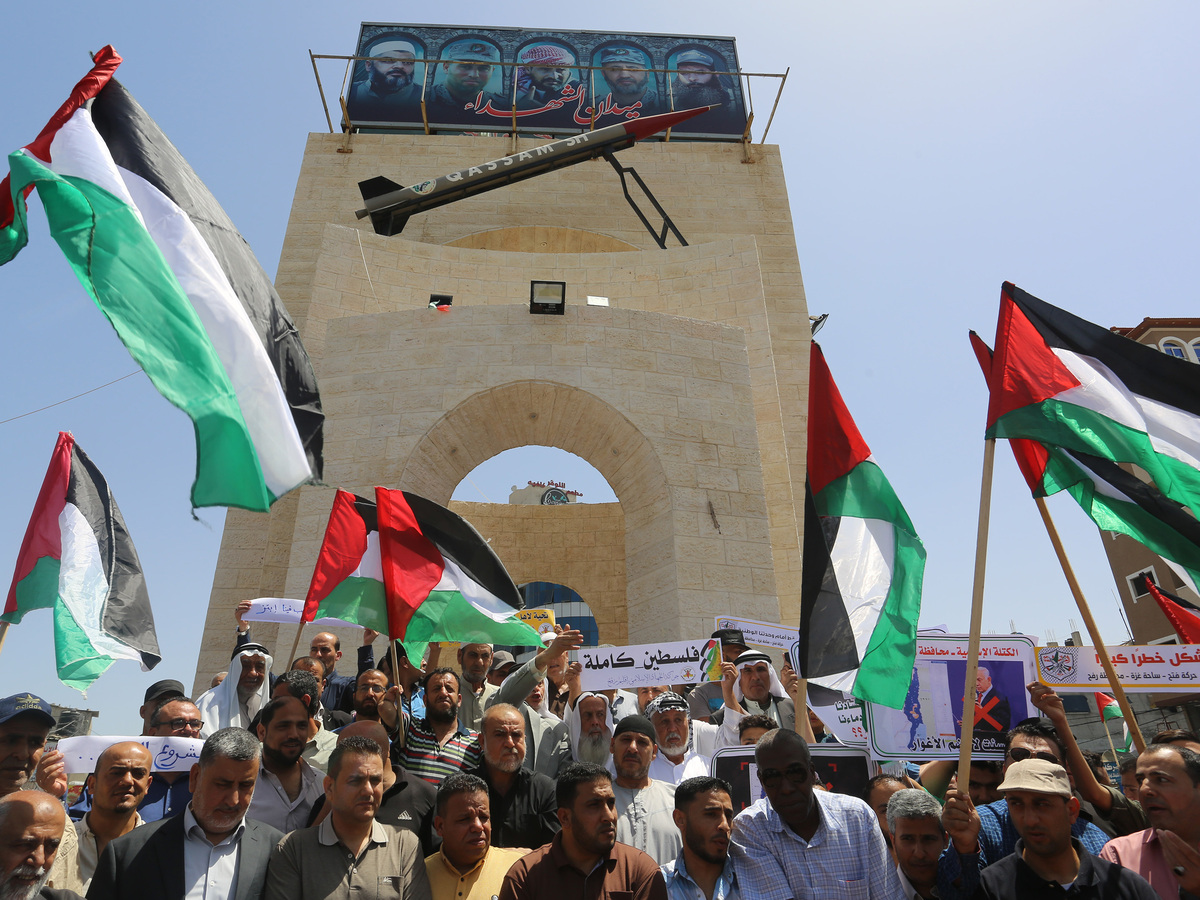 Palestinians demonstrate against Israel’s annexation plans in Rafah, Gaza, on June 11. Palestinian leaders have begun refusing to coordinate with Israel on matters of daily Palestinian life, from tax collection to policing to medical treatments — a move some Palestinians see as self-defeating.

As Israeli Prime Minister Benjamin Netanyahu vows to annex parts of the occupied West Bank next month, with support from the U.S., Palestinians find themselves with no recourse to stop Israel from grabbing the land they seek for a state. So Palestinian leaders are embracing a risky method of protest.

They declared last month they’re no longer bound by the 1990s-era peace accords that govern Israeli-Palestinian relations, and have begun refusing to coordinate with Israel on matters of daily Palestinian life, from tax collection to policing to cancer treatments — arrangements they’ve found humiliating.

As Palestinian leaders see it, Israel — by moving to annex territory instead of negotiating its fate — is not holding up its side of the peace agreements. So the Palestinians will stop holding up theirs.

“This is an issue in which we cannot be silent on,” Palestinian Prime Minister Mohammad Shtayyeh said in a June 9 briefing with reporters. “Annexation is an existential threat for our future.”

Shtayyeh said the threat of annexation requires Palestinians to make sacrifices, but vowed not to resort to violence.

By disrupting the status quo, Palestinian leaders want to seize the world’s attention and scare Israel into abandoning annexation plans. But international donors have criticized the Palestinians for shirking their commitment to the peace accords, and ordinary Palestinians are paying the price for the disruptions in funds, policing and medical care.

“We put our finger in our mouth, bit ourselves, and are waiting for the Israelis to scream,” a Palestinian security official says, speaking on condition of anonymity to criticize government policy.

Palestinians who received transplants in Israeli hospitals say they now cannot get post-operative care because Palestinian bureaucrats refuse to arrange their travel permits to Israel or guarantee they’ll pay for the treatment. Palestinian authorities also refuse to coordinate with Israel to allow Palestinian patients to travel outside the impoverished Gaza Strip for life-saving treatments, according to Physicians for Human Rights-Israel.

Souad Abdel Hadi, 49, was diagnosed last month with leukemia but is unable to travel from Gaza to a West Bank hospital for a bone marrow transplant.

“This is a human situation. This is a medical situation. We are sick people who need treatment and should not be hostages to this political situation,” she tells NPR by telephone.

The Palestinian Authority called on the International Committee of the Red Cross to serve as an intermediary with Israel for medical and security matters now that the Palestinians are suspending their ties with Israel, but the organization said it does not have the resources to administer medical referrals.

“We got calls from families of patients, but basically, we had to sort of clarify that we are not in a position to take that on right now,” says Dan Waites, a spokesperson with the International Committee of the Red Cross.

Breakdown in taxes and policing

Palestinian officials are now refusing to accept any of the tax revenues Israel collects on their behalf, leaving tens of thousands of Palestinian civil servants unlikely to get full paychecks this month. The $145 million a month Israel transfers to the Palestinians is estimated to make up about 60% of the Palestinian Authority’s budget.

Palestinian security officers usually coordinate their movements with Israel, a joint security mechanism to keep the West Bank calm, but officers have been ordered not to speak to their Israeli counterparts.

Security officials claim the suspension of security coordination with Israel has prevented Palestinian police from intervening in deadly cases of domestic violence. In one case though, there are allegations police used that as an excuse for its failure to prevent a killing.

On May 31, three Palestinians were killed in a family dispute, apparently concerning gold rumored to be stored in a relative’s home. Ordinarily, Palestinian police would have needed to ask Israel’s permission to pass through Israeli-controlled areas to intervene in the village. Palestinian police claimed it was unable to dispatch officers to defuse the dispute, due to suspended security ties with Israel, and that officers living in the area unsuccessfully tried to intervene. A relative of the family, who spoke to NPR on condition of anonymity due to the sensitivity of discussing a killing in his family, disputed the police account, saying a police officer detained suspects but later freed them, leading to the shooting.

Over the years, Palestinians have fought uprisings against Israel, and they’ve signed peace accords — but none of it has won them independence, and years of international condemnation have not stopped Israeli settlements from growing in the West Bank.

Some Palestinians are calling for a whole new approach — not to fight to preserve the possibility of an independent Palestinian state, but to acknowledge its impossibility.

“It’s a waste of time if we keep using the same tools and repeating the same statements and relying on the international community to put pressure on Israel,” says Dalal Iriqat, a professor of conflict resolution at the Arab American University in the West Bank. “The number of settlements, expansion, it left no space, geographically speaking, for our Palestinian state … we’re living annexation anyway, de facto. So why don’t we sit back, watch it happen, and have Netanyahu declare the end of the two-state solution?”

The growing consensus among Palestinian intellectuals is that Jewish settlement growth in the West Bank has left no room left for a viable Palestinian state, and that the only option is one state for Israelis and Palestinians, with equal rights for all. That would mean ending the idea of a Jewish state. Though Israel would oppose it, Iriqat is confident that in the distant future, it will prove to be the only realistic option for two peoples inextricably linked in the same small land.

E-Bikes Catch on Outside China, Boosting Global Market Growth Through 2024

The WordPress Core Team has Released an Emergency Release of WordPress 5.5.3

Trends, Insights & Startups from The Fintech 250

Warning: This Is Cyber Criminals’ New Method of Attack

Friday Charts: I Double Dare You To Ignore This Trend

How Telemedicine Can Help Keep Your Health on Track

IOTW: Will There Be An Incident Of Impact On Tuesday’s Election?

New Balluff Mini Inductive Sensors Approved for up to 135 °C